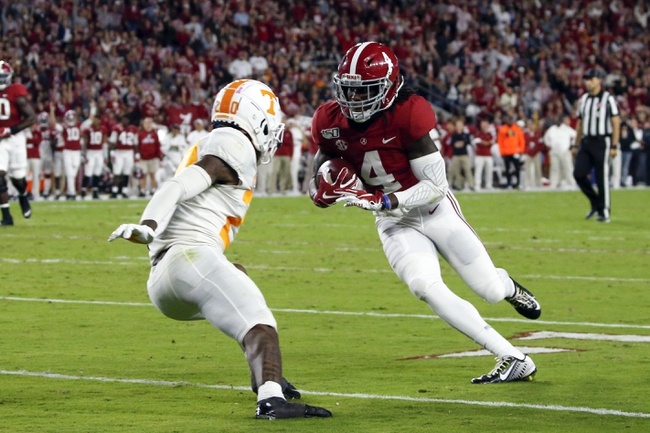 The Arkansas Razorbacks and the Alabama Crimson Tide meet in a week 9 SEC conference college football matchup from Bryant-Denny Stadium on Saturday night.

The Arkansas Razorbacks need a win to snap a four game losing streak after a 51-10 beatdown at the hands of Auburn in their last outing. Ben Hicks threw for 182 yards, a touchdown and an interception while Rakeem Boyd led the Hogs in rushing with 39 rushing yards on 13 carries. Cheyenne O’Grady led the Razorbacks with 7 catches for 72 yards and a touchdown while Trey Knox and Treylon Burks each had 3 receptions. Defensively, De’Jon Harris led Arkansas with 10 total tackles including 5 solo tackles while McTelvin Agim had a fumble recovery for Arkansas. As a team, Arkansas is averaging 385.4 yards of total offense and 24.7 points per game while allowing 413.7 yards of total defense and 30.7 points per game against this season.

The Alabama Crimson Tide will look to remain unbeaten after improving to 7-0 with a 35-13 win over Tennessee in their last outing. Tua Tagovailoa threw for 155 yards and an interception on 11 of 12 passing before leaving due to injury. Mac Jones threw for 72 yards while Slade Bolden threw for a 6-yard TD pass. Najee Harris rushed for 105 yards and a pair of touchdowns while Brian Robinson Jr. had 40 rushing yards and a TD. Henry Ruggs III led the Tide with 4 catches for 72 yards while the aftermentioned Najee Harris had 4 receptions out of the backfield and Miller Forristall had a touchdown reception. Defensively, Trevon Diggs had a fumble recovery for a touchdown while Christian Harris had 8 total tackles and Terrell Lewis has 7 total tackles with a pair of sacks. As a team, Alabama is averaging 513.7 yards of total offense and 38.7 points per game while allowing 321.4 yards of total defense and 16.4 points per game against this season.

Alabama has dominated this head-to-head matchup, winning the last two games by an average of 33 points per game, so I guess that’s why this line is where it is. The issue I have is that the Alabama ground game will have to take on a much heavier workload with Tua Tagovailoa on the shelf for at least a couple of weeks. I’m not sure I feel comfortable laying nearly five touchdowns with an unproven commodity under center like Mac Jones. Arkansas is not a good football team this season by any stretch, but the Hogs did hang with Texas A&M and Kentucky on the road, and all we really need is a couple of scores for a backdoor cover. I’m not going anywhere near this game, but if forced to pick, I’d take a shot with Arkansas and the points in this one.