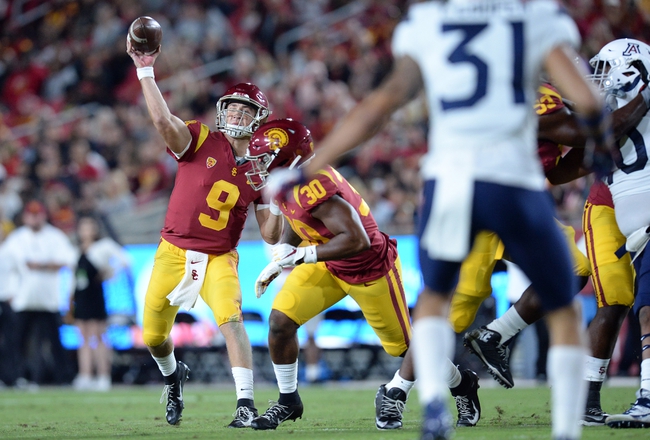 The USC Trojans and the Colorado Buffaloes meet in a week 9 Pac-12 college football tilt from Folsom Field on Friday night.

The USC Trojans will look to build up some momentum after a 41-14 thumping of Arizona in their last outing to improve to 4-3 on the year. Kedon Slovis threw for 232 yards and 2 touchdowns on 19 of 28 passing while Kenan Christon rushed for a team-high 103 yards and 2 touchdowns and Markese Stepp added 66 rushing yards and a touchdown. Tyler Vaughns led USC in receiving with 7 grabs for 73 yards and a touchdown while Michael Pittman Jr. had 4 catches for 69 yards and a touchdown. Defensively, Kana’I Mauga had a team-high 13 total tackles and an interception while John Houston Jr. had 1.5 sacks and 2.5 tackles for a loss. As a team, USC is averaging 428.8 yards of total offense and 29 points per game while allowing 421.8 yards of total defense and 25.7 points per game against this season.

The Colorado Buffaloes will be out to snap a three game losing streak after a 41-10 beatdown at the hands of Washington State in their last outing to fall to 3-4 this season. Steven Montez threw for 129 yards and 2 interceptions on 16 of 30 passing while Alex Fontenot led the Buffs in rushing with 11 carries for 105 yards. Jaren Mangham added 42 rushing yards while Laviska Shenault Jr. had a rushing TD. Shenault Jr. also led Colorado in receiving with 4 catches for 46 yards while K.D. Nixon, Tony Brown and Brady Russell each had 3 catches. Defensively, Davion Taylor led the Buffaloes with 11 total tackles including a team-high 10 solo tackles and 2 tackles for a loss while Derrios Rakestraw had an interception. As a team, Colorado is averaging 407.7 yards of total offense and 26.6 points per game while allowing 483.1 yards of total defense and 34.9 points per game against this season.

I’d like to Give Colorado a shot here at home, but the Buffaloes have allowed 30+ points in all seven of their games this season, including 35 in a loss to an Arizona team that USC just beat the wheels off of last time out. It just seems like it’s next man up for USC at QB and the Trojans just keep finding ways to put points on the board more often than not. I think this is a game that USC uses to flex some muscle ahead of a key matchup with Oregon, so I’ll lay the points with the Trojans on the road in this one.