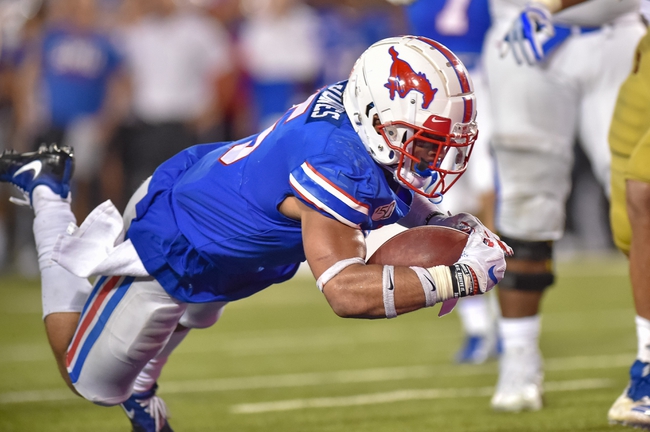 The SMU Mustangs and the Houston Cougars meet in a week 9 AAC conference college football matchup from TDECU Stadium on Thursday night.

The SMU Mustangs will look to remain unbeaten after improving to 7-0 on the year with a 45-21 beatdown of Temple in their last outing. Shane Buechele threw for 457 yards, 6 touchdowns and an interception on 30 of 53 passing while Xavier Jones led the Mustangs on the ground with 29 carries for 105 yards. Reggie Roberson Jr. led the Mustangs in receiving with 250 receiving yards and 3 touchdowns on 8 catches while James Proche had a team-high 9 grabs for 80 yards and a touchdown. Kylen Granson and the aforementioned Xavier Jones also had a receiving touchdown as well in the win. Defensively, Richard McBryde led the Mustangs with 8 solo tackles while Patrick Nelson had a pair of sacks and 2.5 tackles for a loss. As a team, SMU is averaging 521.1 yards of total offense and 44.3 points per game while allowing 370 yards of total defense and 27.3 points per game against this season.

The Houston Cougars will look to get back to .500 after a 24-17 win over the UConn Huskies in their last time out to improve to 3-4 on the year. Logan Holgorsen has thrown for 123 yards and a touchdown on 7of 16 passing while Kyle Porter had a team-high 68 rushing yards with a touchdown and Bryson Smith had a rushing TD as well. Jeremy Singleton led Houston’s receiving group with a pair of catches for 103 receiving yards and a touchdown while Kyle Porter had a team-high 3 catches. Defensively, Grant Stuard led the Cougars with 15 total tackles while Damarion Williams had 10 total tackles including a team-high 7 solo tackles. As a team, Houston is averaging 395.4 yards of total offense and 30.9 points per game while allowing 470.3 yards of total defense and 30.7 points per game against this season.

The points are worth a look given that SMU has had issues at Houston, but those issues came when Houston was the much better team. Houston’s lost a couple of key players including their top QB entering the season, while SMU keeps putting points on the board and keep on rolling to victories, looking like a team primed for a spot in the AAC title game. There’s concern for a lookahead spot with Memphis waiting on deck in what’s basically a game to decide the AAC West title, but I think that SMU gets up enough early that they can afford to rest some guys so I’ll lay the points with SMU here.