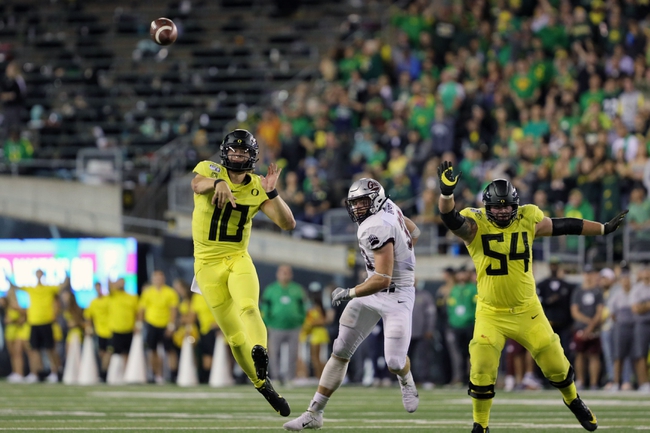 The Oregon Ducks and the Washington Nationals meet in a week 8 Pac-12 conference college football matchup from Alaska Airlines Field at Husky Stadium on Saturday afternoon.

The Oregon Ducks will look to build on their current 5-game winning streak, sitting at 5-1 after a 45-3 beatdown of Colorado in their last outing. Justin Herbert has thrown for 1,602 yards, 17 touchdowns and an interception on 69.1% passing while CJ Verdell has 448 rushing yards and 2 touchdowns and Travis Dye has 288 rushing yards as well this season. Jacob Breeland leads Oregon with 26 catches for 405 yards and 6 touchdowns while Johnny Johnson III has 299 receiving yards with 25 grabs and Jaylon Redd has 26 receptions for 260 yards and 5 touchdowns this year. Defensively, Troy Dye leads the Ducks with 33 total tackles while Jevon Holland has a team-high 3 interceptions and Mase Funa has a team-high 3 sacks. As a team, Oregon is averaging 461 yards of total offense and 36 points per game while allowing 267.7 yards of total defense and 8.7 points per game against, the 3rd-lowest scoring defense in the country this season.

The Washington Huskies will look to build on a 51-27 win over Arizona to improve to 5-2 this season. Jacob Eason has thrown for 1,692 yards, 13 touchdowns and 3 interceptions on 66% passing while Salvon Ahmed has rushed for a team-high 522 rushing yards and 6 touchdowns. Sean McGrew has 330 rushing yards and Richard Newton is right behind with 326 rushing yards and 6 rushing TDs of his own. Aaron Fuller is Washington’s top receiver with 40 grabs for 558 yards and 5 touchdowns while Hunter Bryant has 27 catches for 387 yards and Andre Baccellia has 236 receiving yards this season. Defensively, Myles Bryant leads Washington with 44 total tackles including 28 solo tackles while Cameron Williams has 3 interceptions and Ryan Bowman and Benning Potoa’e each have 4 sacks to lead the huskies this season. As a team, Washington is averaging 424.1 yards of total offense and 36.4 points per game while allowing 363.6 yards of total defense and 19.6 points per game against this season.

The points with Washington at home in a high-profile game are tempting, but Oregon is going to be the best team that Washington has faced so far this season on both sides of the ball. The Ducks have had a couple of close calls, but they ’haven’t allowed more than 7 points in each of their last five games. That streak probably ends here, but given how they’ve performed this season, laying just a field goal with Oregon seems like a solid play so I’ll give up the points and take Oregon here.