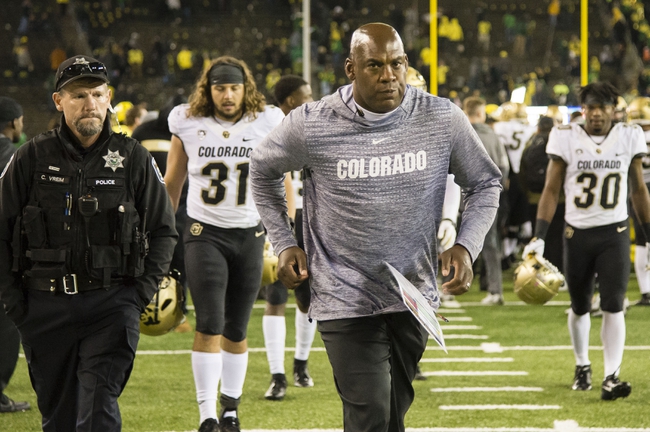 The Colorado Buffaloes and the Washington State Cougars will match up on the college football circuit Saturday.

Colorado enters here at 3-3 overall. Colorado won three of their first four against Colorado State, Nebraska and Arizona State but have lost three of four against Air Force, Arizona and Oregon.

In the loss to the Ducks, Colorado QB Steven Montez logged 131 yards and four picks, with Laviska Shenault hauling in four balls for 70 yards. Alex Fontenot led the rush there on 71 yards.

Over on the Washington State side, they’re 3-3 this year. The Cougars opened with wins over NM State, Northern CO and Houston but have lost three to UCLA, Utah and Arizona State.

In the loss to the Sun Devils, Cougars QB Anthony Gordon had 466 yards and three TDs, with Easop Winston collecting 14 catches for 118 yards and a score. Max Borghi added 31 rush yards and a TD as well.

The early-season momentum Colorado had built up has fizzled a little bit following the 35-30 loss to Arizona and the 45-3 beatdown courtesy of Oregon, but overall on the year they’ve been pretty consistent when it comes to putting up points.

Thing is, Washington State can hang points with the best of them as well; they’ve got at least 31 in five of their six outings so far. If the Cougars defense can show up and keep them in the game I like Washington State to ultimately bang out a cover here in what should be a really good matchup.