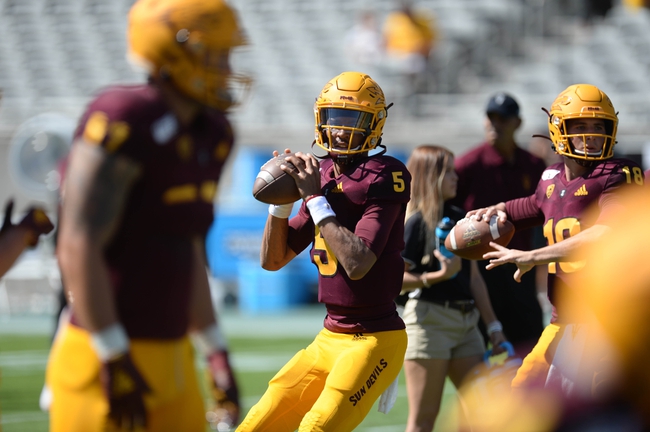 The Arizona State Sun Devils and the Utah Utes meet in a week 8 Pac-12 conference college football matchup from Rice-Eccles Stadium on Saturday.

The Arizona State Sun Devils will look to build on back-to-back wins after a 38-34 win over Washington State in their last outing. Jayden Daniels leads ASU with 1,610 passing yards, 8 touchdowns and an interception on 63.1% passing while Eno Benjamin leads the Sun Devils on the ground with 529 rushing yards and 7 touchdowns. Brandon Aiyuk leads the Sun Devils in receiving with 31 catches for 651 yards and 5 touchdowns while Kyle Williams has 205 receiving yards and Frank Darby and the aforementioned Benjamin each have 100+ receiving yards this season. Defensively, Evan Fields leads the Sun Devils with 42 total tackles while Jermayne Lole has 2.5 sacks this season. As a team, Arizona State is averaging 402.7 yards of total offense and 25.3 points per game while allowing 354.5 yards of total defense and 17.7 points per game against this season.

The Utah Utes will look to build on their 5-1 start to the year with back-to-back wins following a 52-7 rout of Oregon State in their last outing. Tyler Huntley has thrown for 1,393 yards and 9 touchdowns on 75.6% passing this season while Zack Moss leads the Utes in rushing with 514 rushing yards and 6 touchdowns. The aforementioned Huntley, Jordan Wilmore, Devin Brumfield and Devonta’e Henry-Cole each have 100+ rushing yards this season. Bryan Thompson leads Utah’s receiving corps with 310 receiving yards while Brant Kuithe has 207 receiving yards. Demari Simpkins, Jaylen Dixon, Samson Nacua, Derrick Vickers and Solomon Enis each have 100+ receiving yards for the Utes this year. Defensively, Francis Bernard leads the Utes with 43 total tackles including a team-high 22 solo tackles while Devin Lloyd has 42 total tackles as well as 3 sacks. Bernard and Julian Blackmon each have a pair of interceptions for Utah this season. As a team, Utah is averaging 467.3 yards of total offense and 34.8 points per game while allowing 271.5 yards of total defense and 13.2 points per game against this season.

I get Utah being heavily favored at home because the Utes have stomped everyone that have come onto their turf, including a Washington State team that just gave Arizona State all they could handle. However, Arizona State has been battle tested on the road, winning twice outright as an underdog, including a win against Michigan State as a 15.5-point dog a few weeks ago. I’m not saying the Sun Devils win this one outright either, but keeping this within single digits is more than doable as I see Utah winning this one by 6-7 points, so I’ll take Arizona State and the points in this one.