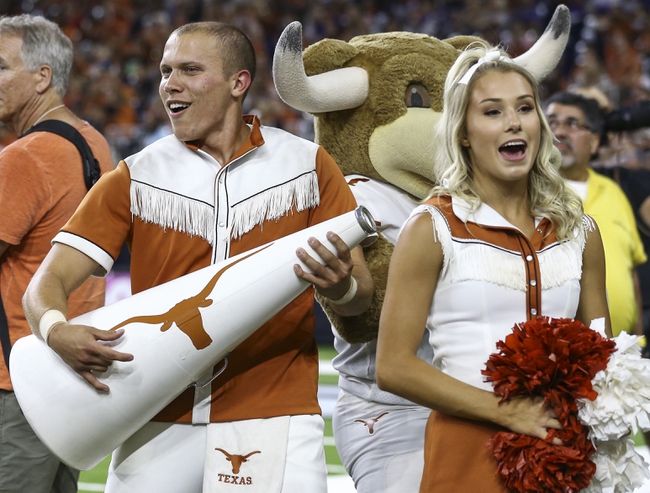 The Kansas Jayhawks and the Texas Longhorns will meet up on the college football circuit Saturday.

Kansas tumbles into this one at 2-4 on the season. The Jayhawks have wins over Indiana State and Boston College, but have fallen to Coastal Carolina, West Virginia, TCU and Oklahoma.

In the loss to the Sooners, Kansas QB Carter Stanley posted 230 yards and three scores, while Pooka Williams led the rush on 137 yards. Stephn Robinson caught five balls for 131 yards and two receiving scores as well.

Over on the Texas side, they’re 4-2 this year. The Longhorns have taken out LA Tech, Rice, OK State and West Virginia but fallen to ranked opponents LSU and Oklahoma.

In the OK game, Texas QB Sam Ehlinger had 210 yards, most going to Collin Johnson who posted 82 yards on six grabs. Roschoon Johnson added 95 yards and a TD rushing.

Kansas has really hit the skids over their last three games. In that trio, they gave up 29, 51 and 45 points respectively, and couldn’t put up more than 24 points in a game. Sure, the Jayhawks didn’t have much of a chance against OK, but losing to West Virginia and getting drilled by TCU is disappointing to say the least.

In any case, Texas is obviously the big favorite here, and I don’t have much confidence in Kansas these days. I’m sticking with the Longhorns.