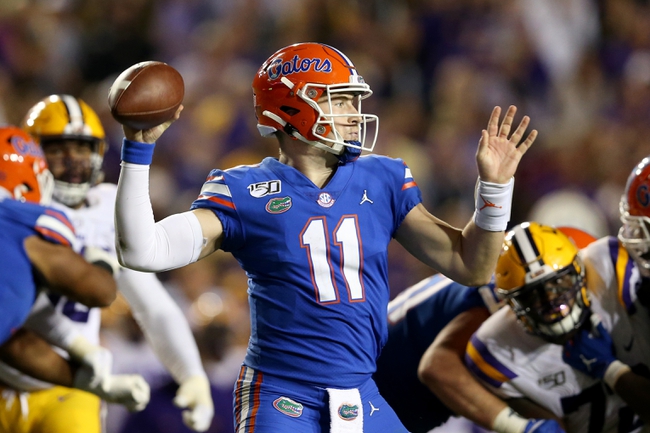 The Florida Gators and the South Carolina Gamecocks meet in a week 8 SEC conference college football matchup from Williams-Brice Stadium on Saturday afternoon.

The Florida Gators will be out to bounce back from their first loss of the season coming in the form of a 42-28 loss to LSU in their last outing, dropping to 6-1 on the year. Kyle Trask has thrown for 1,191 yards, 10 touchdowns and 3 interceptions on 68.4% passing while Lamical Perine leads the Gators in rushing with 392 rushing yards and 4 touchdowns. Dameon Pierce and Emory Jones each have 100+ rushing yards for the Gators this season. Kyle Pitts leads Florida in receiving with 30 grabs for 362 yards and 3 touchdowns while Van Jefferson and Freddie Swain each have 300+ receiving yards and 3 touchdowns as well. Trevon Grimes and Josh Hammond each have 200+ receiving yards and a touchdown for UF this season. Defensively, David Reese II leads the Gators with 53 total tackles while Jonathan Greenard has a team-high 4 sacks and Shawn Davis has 3 interceptions this season. As a team, Florida is averaging 429.3 yards of total offense and 31.7 points per game while allowing 314.4 yards of total defense and 14.1 points per game against this season.

The South Carolina Gamecocks will look for a big home win after a massive 20-17 road win over Georgia in their last outing. Ryan Hilinski has thrown for 1,028 yards, 6 touchdowns and 3 interceptions while Rico Dowdle leads the Gamecocks in rushing with 449 rushing yards and 4 touchdowns and Tavien Feaster has contributed 317 rushing yards and 3 touchdowns this season. Bryan Edwards leads the Gamecocks in receiving with 426 receiving yards, 33 receptions and 4 touchdowns while Shi Smith has 23 grabs for 234 yards. Ernest Jones leads South Carolina’s defense with 50 total tackles while T.J. Brunson has 44 total tackles and Israel Mukuamu has 37 total tackles with a team-high 27 solo tackles and 4 interceptions this season. Javon Kinlaw leads USC with 5 sacks while D.J. Wonnum has 3.5 sacks and Aaron Sterling has 3 sacks this season. As a team, South Carolina is averaging 409.8 yards of total offense and 28.8 points per game while allowing 403.7 yards of total defense and 23.2 points per game against this season.

Getting South Carolina with points at home in a rivalry game is tempting, but even after the win over Georgia, I can’t side with South Carolina here as the Gamecocks are primed and ready for a letdown after such a huge win. It also doesn’t help that the Gamecocks have to play a Florida team that’s bitter after their first loss of the season in a game that they were competitive in for the most part and the Gators are still a top-10 defense that aren’t easy to crack. I’ll lay the points with the Gators in this one.