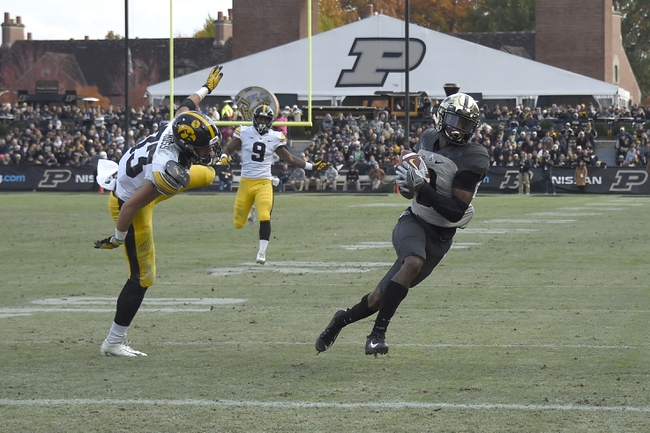 The Iowa Hawkeyes also need a victory to rebound from back-to-back losses. The Iowa Hawkeyes have won three of their last four home games. Nate Stanley is completing 61.1 percent of his passes for 1,511 yards, nine touchdowns and four interceptions. Stanley has three or more touchdown passes in six of his last 15 games. Ihmir Smith-Marsette and Brandon Smith have combined for 687 receiving yards and seven touchdowns while Nico Ragaini has 24 receptions. The Iowa Hawkeyes ground game is averaging 156.8 yards per contest, and Mekhi Sargent leads the way with 329 yards and two touchdowns. Defensively, Iowa is allowing 10.2 points and 260.8 yards per game. Kristian Welch leads the Iowa Hawkeyes with 47 tackles, A.J. Epenesa has three sacks and Michael Ojemudia has two interceptions.

The Purdue Boilermakers have covered five of their last six games as a double-digit underdog. The Iowa Hawkeyes have covered seven of their last 10 games as a double-digit favorite. Purdue is coming off a blowout win last week over Maryland, but the Terms are free falling, so I'm not sure how much that moves the needle for me. Before that, Purdue looked lifeless for much of the season. Iowa hung around with Michigan and Penn State but couldn't close the deal, however, the Hawkeyes have shown they can beat up on the subpar teams, and that's the category Purdue falls in at the moment. I like the Iowa Hawkeyes to take out some of their frustrations on the team they've beaten six of the last nine years.