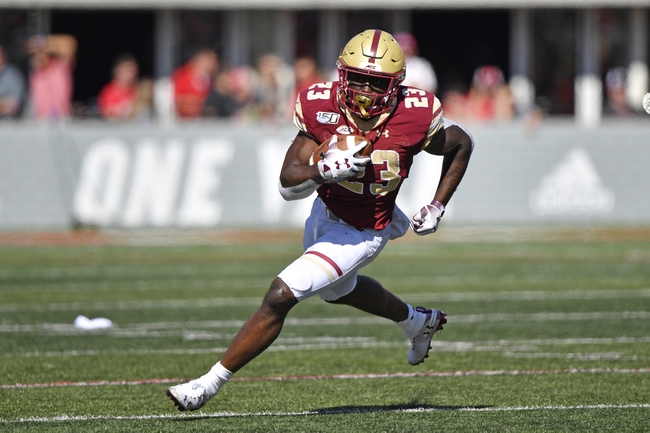 The NC State Wolfpack and the Boston College Eagles will match up on the college football circuit Saturday.

NC State enters here at 4-2 on the season. The Wolfpack have fallen to West Virginia and Florida State so far but otherwise taken out East Carolina, WCU, Ball State and Syracuse.

In the win over the Orange, NC State QB Bailey Hockman posted 205 yards with an INT, and Zonovan Knight rushed for 61 yards. Emeka Emezie added 77 yards on five receptions there as well.

Over on the Boston College side, they’re 3-3 this year. The Eagles have taken out Virginia Tech, Richmond and Rutgers but lost to Kansas, Wake Forest and Louisville otherwise.

In the win over the Cardinals, Boston College QB Dennis Grosel had 111 yards, three TDs and one pick, while AJ Dillon rushed for 118 yards. Hunter Long added 99 yards and a score on three grabs.

NC State has been pretty choppy over their last four games; their losses haven’t been that close, and their wins were probably a little too much so. The Wolfpack have just 29 points combined over the last two games, which is concerning as well.

Boston College, conversely, has been scoring pretty well (63 points in their last pair) but also not great defensively (68 points allowed in the last pair). This one could get a little dicey but I’m leaning toward the Eagles. Probably staying away though.