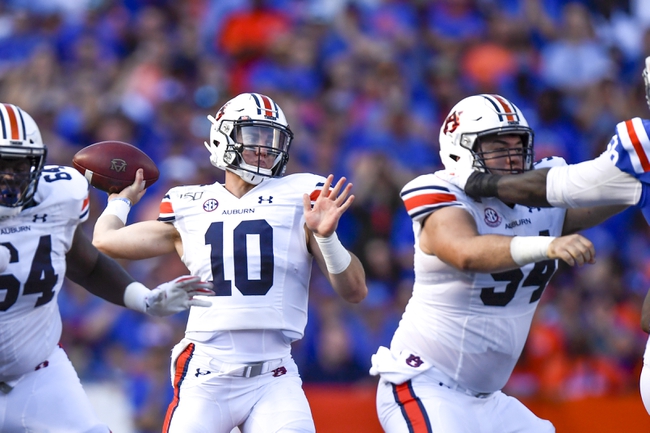 The Auburn Tigers will come into this one rested after their bye week, having an extra week to stew on their first loss of the season coming in the form of a 24-13 loss to Florida last time out. Bo Nix has thrown for 1,125 yards, 8 touchdowns and 5 interceptions on 54.6% passing while JaTarvious Whitlow has rushed for a team-high 544 rushing yards and 7 touchdowns. Seth Williams leads Auburn in receiving with 21 grabs for 368 yards and 5 touchdowns while Eli Stove and Will Hastings each have 100+ receiving yards for Auburn this season. Defensively, Jeremiah Dinson leads the Tigers with 43 total tackles including a team-high 30 solo tackles while Derrick Brown and Tyrone Truesdell each have 3 sacks this year. As a team, Auburn is averaging 424.2 yards of total offense and 33.8 points per game while allowing 333.2 yards of total defense and 18.3 points per game against this season.

The Arkansas Razorbacks will be out to rebound from their current three game losing streak after a 24-20 loss to Kentucky in their last outing. Nick Starkel has thrown for 1,060 yards, 7 touchdowns and 7 interceptions on 58.7% passing while Ben Hicks has thrown for 510 yards and a touchdown on 51.3% passing. Rakeem Boyd leads the Hogs in rushing with 617 yards and 5 touchdowns and Devwah Whaley has 190 rushing yards and 3 touchdowns. Trey Knox leads Arkansas’ receiving corps with 323 receiving yards while Mike Woods has 24 catches for 319 yards. Cheyenne O’Grady and Treylon Burks each have 200+ receiving yards as well this season. Defensively, Kamren Curl and De’Jon Harris each have a team-high 44 tackles with Curl logging a team-high 27 solo tackles with a pair of sacks and a pair of interceptions. McTelvin Agim leads Arkansas with 4 sacks and Jamario Bell has 3.5 sacks as well this season. As a team, Arkansas is averaging 410.7 yards of total offense and 27.2 points per game while allowing 400.8 yards of total defense and 27.3 points per game against this season.

The points with Arkansas at home considering that each of their last three defeats have come by 7 points or less. However, Auburn has had time to think about that loss to Florida, a game that the Tigers could’ve had and could be heading into this game unbeaten. Auburn is also a better team than San Jose State, Texas A&M and Kentucky, the three teams that took down Arkansas during this losing skid. I have respect for how Arkansas has battled lately but I just think that Auburn is ticked off and will take out their frustrations on Arkansas here so I’ll lay the points.