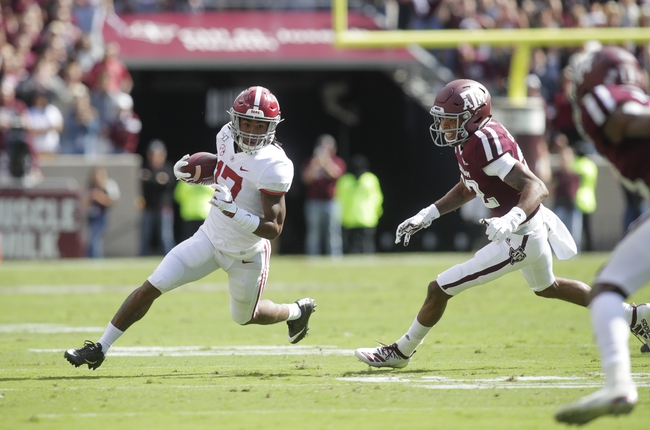 The Tennessee Volunteers and the Alabama Crimson Tide will square off in a week 8 SEC conference college football matchup from Bryant-Denny Stadium on Saturday.

The Tennessee Volunteers will be looking to get some momentum after picking up a 20-10 win over Mississippi State in their last outing. Jarrett Guarantano has thrown for 856 yards, 8 touchdowns and 4 interceptions on 63.8% passing while Ty Chandler leads the Vols with 383 rushing yards. Jauan Jennings leads Tennessee in receiving with 29 grabs for 412 yards and 5 touchdowns while Marquez Callaway has 13 catches for 259 yards and 3 TDs. Defensively, Theo Jackson leads the Vols with 37 total tackles including a team-high 18 solo tackles while Darrell Taylor has a team-high 3 sacks and Nigel Warrior has 2 interceptions. As a team, Tennessee is averaging 353.5 yards of total offense and 23 points per game while allowing 358.7 yards of total defense and 25.7 points per game against this season.

The Alabama Crimson Tide will look to build on their 6-0 start to the year after a 47-28 over Texas A&M in their last outing. Tua Tagovailoa has thrown for 2,011 yards, 27 touchdowns and an interception on 73.6% passing while Najee Harris leads Bama in rushing with 451 rushing yards and Brian Robinson Jr. has 249 rushing yards this season. DeVonta Smith leads Alabama in rushing with 636 receiving yards and 9 touchdowns while Jerry Jeudy has a team-high 42 grabs for 538 yards and 6 touchdowns. Henry Ruggs III has 394 receiving yards with 5 touchdowns as well for the Tide this year. Defensively, Xavier McKinney leads Alabama with 47 total tackles including a team-high 30 solo tackles while Anfernee Jennings and Terrell Lewis each have 4 sacks. As a team, Alabama is averaging 537.2 yards of total offense while producing the 2nd-most points per game in the country averaging 51 points per game while allowing 336.2 yards of total defense and 17 points per game against this season.

It’s nice to see Tennessee show some signs of life with their win over Mississippi State, but I’m just not overly thrilled with the Vols’ chances here. Alabama allows teams to hang around but this is still a Tide team that’s scored at least 42 points in each of their six games so far and has been dominant at home, winning by at least 28 points in each of their four home games. It’s a large line, but I think Alabama wins this game in a rout.