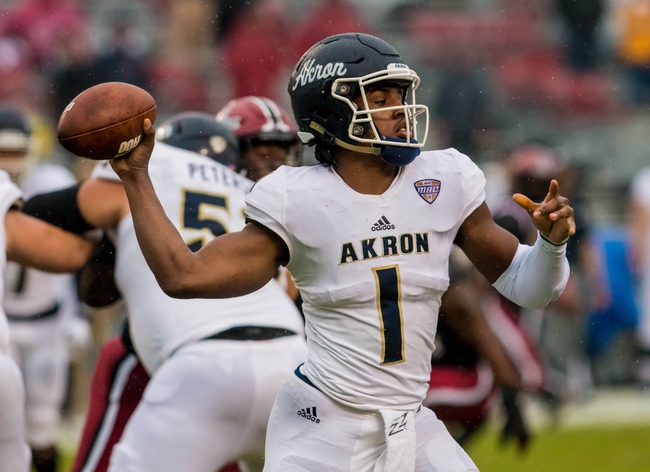 The Buffalo Bulls and the Akron Zips meet in week 8 college football MAC-tion from Summa Field at InfoCision Stadium on Saturday afternoon.

The Buffalo Bulls will look to rebound after losing 4 of their last 5 games following a 21-20 overtime loss to Ohio in their last outing. Matt Myers has thrown for 602 yards, 6 touchdowns and 4 interceptions on 46.7% passing while Jaret Patterson has rushed for 598 yards and 4 touchdowns and Kevin Marks has 532 rushing yards and a pair of touchdowns. Antonio Nunn leads Buffalo’s receiving group with 18 catches for 268 yards and 2 touchdowns. Defensively, Tyrone Hill leads Buffalo with 44 total tackles including a team-high 30 solo tackles while Malcolm Koonce has a team-high 4.5 sacks. As a team, Buffalo is averaging 368.5 yards of total offense and 24.3 points per game while allowing 316 yards of total defense and 27.8 points per game against this season.

The Akron Zips will be looking for their first win of the season after dropping to 0-6 with a 26-3 loss to Kent State in their last outing. Kato Nelson has thrown for 1,265 yards, 8 touchdowns and 3 interceptions while also leading the Zips in rushing with 136 rushing yards. Nate Stewart leads the Zips’ receiving corps with 26 catches for 391 yards and 3 touchdowns while Dustin Burkhart has 320 receiving yards. John Lako leads Akron with 68 total tackles including a team-high 30 solo tackles while Bubba Arslanian is 2nd with 61 total tackles. As a team, Akron is averaging 309.8 yards of total offense and 14.3 points per game while allowing 439.3 yards of total defense and 36 points per game against this season.

Something has to give here as Buffalo’s gone 0-3 ATS on the road while Akron has gone 0-6 ATS this season as a whole. However, Buffalo may have the better record and numbers, but the Bulls have never won a game in Akron so it’s kind of hard to cover this kind of heavy line when you can’t win period. Based on that alone and since I don’t have much of an idea otherwise, I’ll take Akron and the points but realistically I’m not betting this game.