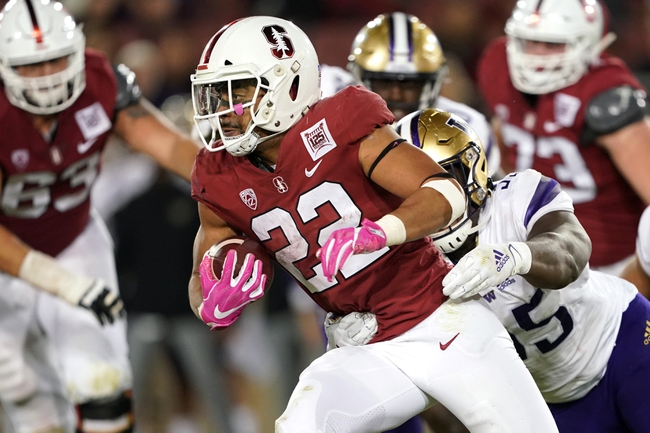 The UCLA Bruins and the Stanford Cardinal meet in a week 8 Pac-12 conference college football matchup from Stanford Stadium on Thursday night.

The UCLA Bruins have had a week to reset after falling to 1-5 on the year with back-to-back losses following a 48-31 defeat at the hands of Oregon State last time out. Dorian Thompson-Robinson has thrown for 1,243 yards, 11 touchdowns and 6 interceptions on 56.3% passing while Joshua Kelley leads the Bruins with 395 rushing yards and 3 touchdowns and Demetric Felton is right behind in 2nd with 307 rushing yards this season. Felton also leads UCLA in receiving with 31 catches for 397 yards and 3 touchdowns while Kyle Phillips and Jaylen Erwin each have 242 receiving yards this year. Devin Asiasi and Chase Cota also have 200+ receiving yards for UCLA this year. Defensively, Krys Barnes leads UCLA with 42 total tackles including a team-high 31 solo tackles while Stephan Blaylock had 34 total tackles and Leni Toailoa and Keisean Lucier-Smith each have a pair of sacks this season. As a team, UCLA is averaging 397.3 yards of total offense and 26.2 points per game while allowing 503.3 yards of total defense and 37.7 points per game against this season.

The Stanford Cardinal had their bye week as well, hoping to maintain the momentum from back-to-back wins following a 23-13 win over Washington that got Stanford back to .500 at 3-3 on the year. Davis Mills has thrown for 890 yards, 5 touchdowns and an interception on 54.5% passing while Cameron Scarlett leads the Cardinal in rushing with 564 rushing yards and 2 touchdowns. Michael Wilson leads Stanford’s receiving group with 25 grabs for 317 yards and 3 touchdowns while Colby Parkinson and Connor Wedington are also 200+ yard receivers for Stanford this season. Defensively, Curtis Robinson leads Stanford with 33 total tackles while Andrew Pryts is right behind in 2nd with 31 total tackles and Casey Toohill has 30 total tackles with a team-high 4 sacks. As a team, Stanford is averaging 353 yards of total offense and 20.7 points per game while allowing 393.7 yards of total defense and 26.5 points per game against this season.

Maybe the bye week did UCLA some good and the Bruins finally were able to clear their heads, but until I see signs of life from the Bruins, there’s no way I’m putting one red cent in UCLA given what we’ve seen so far this season. I’d almost be willing to say that UCLA is the worst team in the Pac-12 this year. Stanford’s had their ups and downs, but the fact is that even though UCLA is the higher-scoring offense, the Bruins can’t keep points off of the board while Stanford hasn’t been getting it done pretty, but the Cardinal have been playing very well on defense and should be able to stifle UCLA here. The Bruins have also had a lot of issues against the number when taking on Stanford, so I’ll lay the points with the Cardinal at home here.