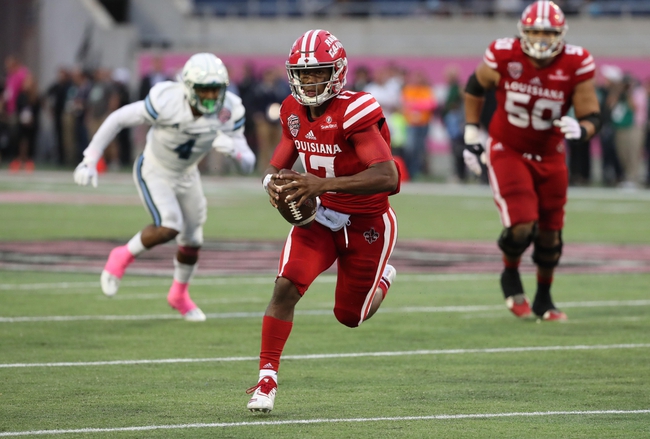 The Louisiana Ragin’ Cajuns will look to rebound from a 17-7 loss at the hands of Appalachian State in their last outing that snapped a four game winning streak. Levi Lewis has thrown for 1,111 yards, 9 touchdowns and 2 interceptions on 63% passing while Trey Ragas leads the Cajuns on the ground with 573 rushing yards and 6 touchdowns. Elijah Mitchell is 2nd for Louisiana in rushing with 470 rushing yards and 9 touchdowns and Raymond Calais has 320 rushing yards as well this season. Ja’Marcus Bradley has 23 receptions for 367 yards and 4 TDs to lead Louisiana’s receiving corps while Jamal Bell has 22 catches for 252 yards and Jarrod Jackson and Peter Leblanc each have 100+ receiving yards for the Cajuns this season. Defensively, Jacques Boureaux leads Louisiana with 43 total tackles including 20 solo tackles while Percy Butler has 28 total tackles including a team-high 23 solo tackles. Joe Dillon and Kris Moncrief each have 3 sacks as well for Louisiana this season. As a team, Louisiana is averaging 492.3 yards of total offense and 38.2 points per game while allowing 344.8 yards of total defense and 20.7 points per game against this season.

The Arkansas State Red Wolves will look to rebound and get back above .500 after a 52-38 loss to Georgia State in their last outing. Layne Hatcher has thrown for 739 yards, 8 touchdowns and 5 interceptions on 68.1% passing while Marcel Murray leads the Red Wolves with 194 rushing yards and Isaiah Azubuike has 181 rushing yards. Omar Bayless leads A-State in receiving with 44 grabs for 843 yards and 10 touchdowns while Jonathan Adams Jr. has 31 grabs for 404 yards and Kirk Merritt has 35 receptions for 396 yards and 5 touchdowns. Defensively, B.J. Edmonds leads Arkansas State with 45 total tackles including a team-high 28 solo tackles while Tajhea Chambers came right behind in 2nd with 44 total tackles. William Bradley-King leads Arkansas State with 5 sacks while Forrest Merrill is 2nd with 3.5 sacks this season. As a team, Arkansas State is averaging 430.8 yards of total offense and 33.7 points per game while allowing 537.3 yards of total defense and 38.7 points per game against this season.

Both of these teams are good on offense, but the difference for me is that Louisiana plays much better defense as we saw against App State where the Cajuns held the Mountaineers to just 17 points in a losing effort, including 10 points for most of that game. The Ragin’ Cajuns have also been solid on the road, winning both of their road games by double digits. Add in the success that Louisiana has had ATS, and I think you have to lay the points on the road with the Ragin’ Cajuns in this spot.