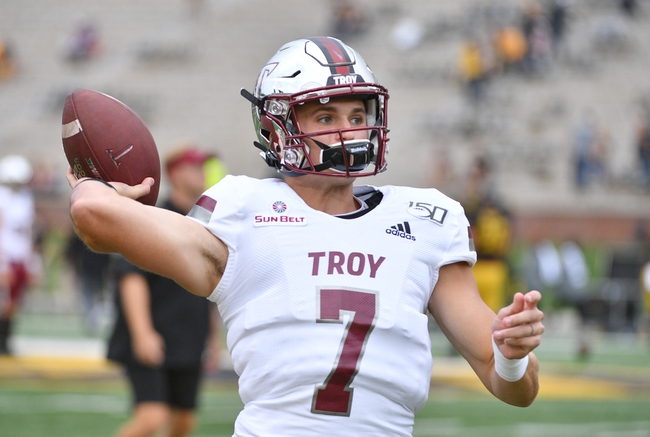 The South Alabama Jaguars will be out to snap a four game losing streak after falling to Georgia Southern in their last outing by a final score of 20-17 in OT. Cephus Johnson leads the Jaguars at QB with 708 passing yards, 5 touchdowns and 5 interceptions on 53.6% passing while Tra Minter leads USA in rushing with 477 rushing yards and 2 touchdowns while the aforementioned Johnson has 4 rushing scores. Kawaan Baker leads the Jaguars in receiving with 16 catches for 353 yards and 3 touchdowns while Jalen Tolbert has 14 grabs for 218 receiving yards. Defensively, Nick Mobley leads the Jaguars with 55 total tackles while DJ Daniels has 43 total tackles including a team-high 33 solo tackles. As a team, South Alabama is averaging 319 yards of total offense and 16.8 points per game while allowing 400.5 yards of total defense and 29.3 points per game against this season.

The Troy Trojans will look to rebound from back-to-back losses after a 42-10 defeat at the hands of Missouri in their last outing. Kaleb Barker has thrown for 1,476 yards, 14 touchdowns and 4 interceptions while DK Billingsley has rushed for 350 rushing yards and 4 touchdowns to lead Troy in that department. Kaylon Geiger leads Troy’s receiving corps with 410 receiving yards on 30 receptions while Reggie Todd, Luke Whittemore and Khalil McClain each have 200+ receiving yards with McClain logging 5 receiving touchdowns this season. Defensively, Carlton Martial leads the Trojans with 50 total tackles including a team-high 30 solo tackles. As a team, Troy is averaging 452.6 yards of total offense and 34.6 points per game while allowing 402.4 yards of total defense and 32 points per game against this season.

I get Troy being favored because they’re at home, but even so, Troy hasn’t covered in any of their three home games this year and that includes a pair of outright losses as a home favorite. South Alabama isn’t great, but they’ve stepped up their play against Georgia Southern and in this matchup, only one of the last seven games have been decided by more than 14 points. I just think that I have more faith in South Alabama keeping this one close than Troy covering a double digit line at home, so I’ll take a stab at the Jaguars and the points in this one.