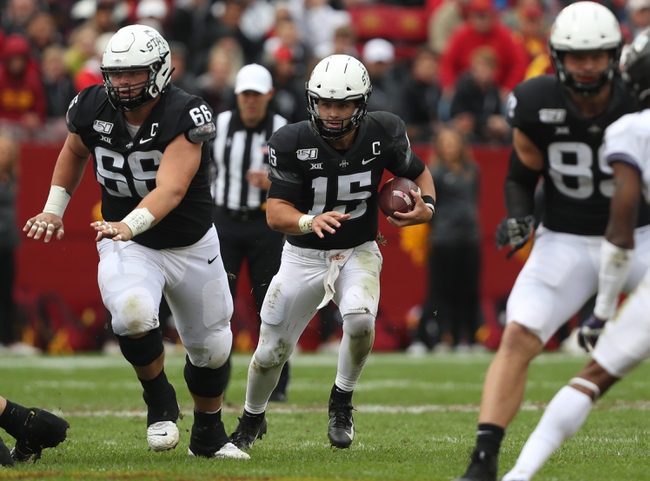 The Iowa State Cyclones will look to find some consistency after alternating wins and losses in each of their five games so far this season, improving to 3-2 with a 49-24 beatdown of TCU in their last outing. Brock Purdy has thrown for 1,578 yards, 10 touchdowns and 2 interceptions on 70.8% passing while also leading the Cyclones in rushing with 203 rushing yards and 5 touchdowns. Johnnie Lang has 182 rushing yards and 3 TDs while Deshaunte Jones has 37 receptions for 444 yards to leads ISU in receiving. Tarique Milton has 374 receiving yards and Charlie Kolar also has 274 receiving yards for the Cyclones this season. Defensively, Greg Elsworth leads Iowa State with 39 total tackles including a team-high 20 solo tackles while Lawrence White is right behind with 38 and Marcel Spears Jr. is 3rd with 37 total tackles. O’Rien Vance also has 34 tackles and a team-high 6.5 sacks this season. As a team, Iowa State is averaging 487.2 yards of total offense and 37.6 points per game while allowing 348 yards of total defense and 22.2 points per game against this season.

The West Virginia Mountaineers will look to rebound after a 42-31 loss to Texas in their last outing, falling to 3-2 on the year as a result. Austin Kendall has thrown for 1,238 yards, 9 touchdowns and 7 interceptions on 65.8% passing while Kennedy McKoy leads WVU in rushing with 181 rushing yards and 3 touchdowns and Leddie Brown has 130 rushing yards as well. Sam James leads West Virginia in receiving with 32 catches for 329 yards and a pair of touchdowns while T.J. Simmons has 260 receiving yards and George Campbell has 3 touchdown grabs this season. Defensively, Josh Changler leads West Virginia with 40 total tackles including 20 solo tackles while Darius Stills and Dante Stills each have 4 sacks and Keith Washington Jr. has 3 interceptions this season. As a team, West Virginia is averaging 353.4 yards of total offense and 26.2 points per game while allowing 386.2 yards of total defense per game and 28.8 points per game against this season.

Iowa State beat the heck out of TCU in their last game and West Virginia barely missed a cover against Texas, but the fact here is that I’m not sure Iowa State should be laying double digits against anyone lately as the cyclones have been involved in a couple of close calls with three of their five games being decided by 3 points or less and their only road game being a two-point loss to Baylor a couple of weeks ago. West Virginia is a tough team to gauge, but the Mountaineers have been playing pretty respectably lately, so as a home dog, I’ll take West Virginia and the points in a game I can’t see being decided by more than a touchdown.