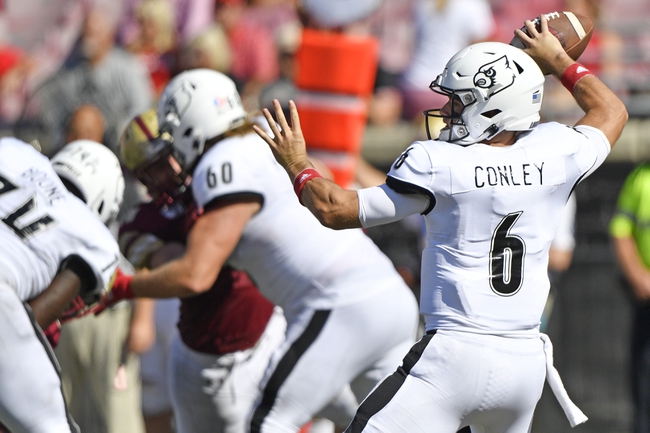 The Louisville Cardinals and the Wake Forest Demon Deacons will match up on the college football field Saturday.

Louisville comes in here at 3-2 on the year. The Cardinals have recorded losses to Notre Dame and Florida State this year but otherwise gotten wins over Eastern Kentucky, Western Kentucky and Boston College.

In the win over BC, Javian Hawkins rushed for 172 yards and a TD to lead the Cardinals, and Seth Dawkins put up 170 yards and a TD on six catches. Malik Cunningham and Evan Conley combined for a pair of passing touchdowns in that one as well.

Over on the Wake Forest side, they’re rolling at 5-0 so far.

In the game five victory, Wake Forest QB Jamie Newman had 243 yards, two TDs and a pick, and also led the rush with 102 yards. Scotty Washington was the top receiver for the Deacons there with 94 yards on five grabs.

Louisville has scored a combined 65 points over their last two games, but they’ve also given up a combined 76, so they were fortunate to escape the Eagles with a 41-39 victory last weekend.

Given that Wake has had a couple of relatively “down” games over their last three (one-score wins over UNC and BC) this one could get dicey. I’m going to go with the Cardinals to eke into a cover here.