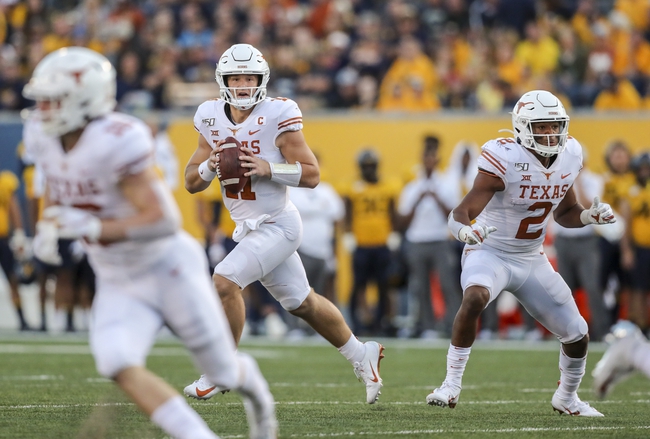 The Oklahoma Sooners and the Texas Longhorns meet in a week 7 Big 12 conference college football matchup from the Cotton Bowl on Saturday afternoon.

The Oklahoma Sooners will look to remain unbeaten after improving to 5-0 on the year after a 45-20 win over Kansas in their last outing. Jalen Hurts has thrown for 1,523 yards, 14 touchdowns and 2 interceptions on 75.2% passing while also leading the Sooners with 499 rushing yards and 7 rushing touchdowns. Trey Sermon has 345 rushing yards and 4 touchdowns and Rhamondre Stevenson has 320 rushing yards and 5 TDs. CeeDee Lamb leads OU’s receiving group with 18 catches for 439 yards and 7 scores while Charleston Rambo has 14 grabs for 383 yards with 4 touchdowns and Jadon Haselwood has 218 receiving yards. On defense, Kenneth Murray leads Oklahoma with 37 total tackles as well as 1.5 sacks while Brian Asamoah, Ronnie Perkins and Jalen Redmond each have a pair of sacks this season. As a team, Oklahoma leads the country in total yardage, averaging 643.8 yards of total offense as well as the 2nd-highest scoring offense averaging 53.4 points per game while allowing 348.2 yards of total defense and 19 points per game against this season.

The Texas Longhorns will be looking to build on their three game winning streak after a 42-31 win over West Virginia in their last outing. Sam Ehlinger has thrown for 1,448 yards, 17 touchdowns and 2 interceptions on 69.4% passing while Keaontay Ingram leads the Longhorns with 313 rushing yards and 3 touchdowns. Roschon Johnson has 268 rushing yards while the previously mentioned Ehlinger has 236 rushing yards and 3 TDs. Devin Duvernay leads the Longhorns with 46 catches for 463 yards and 4 touchdowns while Brennan Eagles and Jake Smith each have 4 touchdowns as well. Defensively, Caden Steros leads the Longhorns with 30 total tackles, including a team-high 23 solo tackles while Joseph Ossai and Brandon Jones are right behind with 29 total tackles each. Ossai has a pair of sacks and a pair of interceptions while Juwan Mitchell has a pair of sacks as well. As a team, Texas is averaging 485.2 yards of total offense and 41.8 points per game while allowing 441.8 yards of total defense and 26.6 points per game against this season.

You can make a strong case for laying the points with Oklahoma as the Sooners have been as dominant as it gets over the last few weeks, holding each of their last four opponents to 20 points or less while scoring at least 45 in all five of their games this season. However, Texas is going to be the most balanced and overall talented team that Oklahoma’s played up to this point, and while Texas has had a couple of battles in Big 12 play, they’ve also put up at least 36 points in all five of their games, including that 45-38 thriller loss to LSU a few weeks ago. Furthermore, five of the last six meetings between the two sides have been decided by a touchdown or less. This game is also at the Cotton Bowl, less than 3 hours away from Austin, so you have to imagine that the Longhorns will have a strong fan base out for this one. This matchup has just been hard fought and tight knit in the last few years, and given the talent on both sides, I think we see that kind of game again so I’ll take the points with Texas in a game that should be decided by a single score.