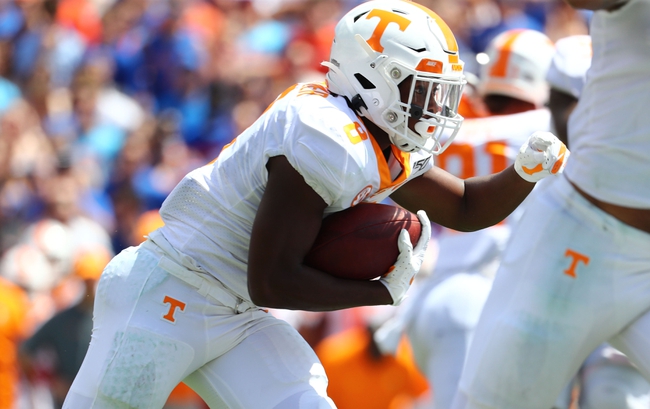 The Mississippi State Bulldogs and the Tennessee Volunteers meet in a week 7 SEC conference college football matchup from Neyland Stadium on Saturday.

The Mississippi State Bulldogs will look to find some consistency after alternating wins and losses in each of their last four games, including being on the wrong end of a 56-23 beatdown at the hands of Auburn in their last outing. Garrett Shrader has thrown got 511 yards, 2 touchdowns and an interception on 58.8% passing while Kylin Hill leads the Bulldogs in rushing with 596 yards and 5 touchdowns and the aforementioned Shrader has 312 rushing yards this season. Osirus Mitchell leads Mississippi State with 19 grabs for 277 yards and 4 touchdowns while Deddrick Thomas and Farrod Green each have 100+ receiving yards this season. Defensively, C.J. Morgan leads the Bulldogs with 36 total tackles while Leo Lewis has 34 total tackles and Jaquarius Landrews has 33 total tackles including a team-high 21 solo tackles this season. As a team, Mississippi State is averaging 398 yards of total offense and 30.2 points per game while allowing 401.8 yards of total defense and 28.6 points per game against this season.

The Tennessee Volunteers are in dire need of a win after falling to 1-4 with a 43-14 loss to Georgia in their last outing. Jarrett Guarantano has thrown for 750 yards, 7 touchdowns and 4 interceptions this season while Brian Maurer has tossed for 303 yards, 2 touchdowns and 2 picks. Ty Chandler leads Tennessee in rushing with 320 yards and 2 touchdowns while Eric Gray has 170 rushing yards and Tim Jordan has 112 yards on the ground this season. Jauan Jennings leads the Vols in receiving with 26 catches for 395 yards and 5 touchdowns while Marquez Callaway has 13 catches for 259 yards and 3 scores. Defensively, Theo Jackson leads Tennessee with 33 total tackles including a team-high 16 solo tackles while Henry To’o To’o is right behind with 32 total tackles on the year. As a team, Tennessee is averaging 352.8 yards of total offense and 23.6 points per game while allowing 377 yards of total defense and 28.8 points per game against this season.

Tennessee might be up there (or down there depending on how you look at it) with some of the worst teams in the country this season. Mississippi State’s also looked good against average and below average teams, which you could definitely lump Tennessee in with. Mississippi State has had major issues on the road against the Vols, losing each of their last three meetings at Neyland Stadium but 31+ points, but I just don’t see the Volunteers putting up a fight so I’ll lay the points with the Bulldogs on the road here.