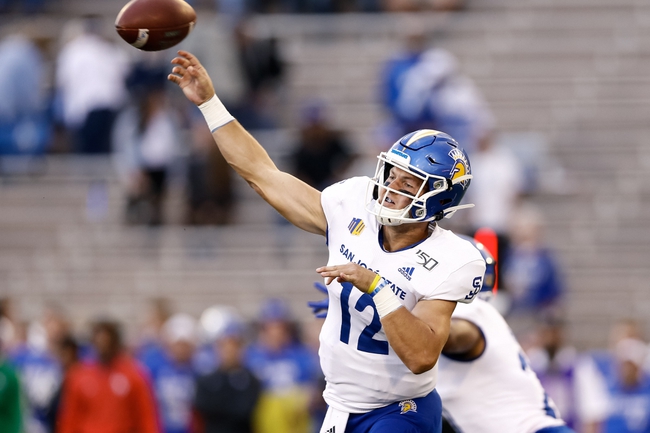 Where to Watch: ATTSN Stream live sports and exclusive originals on ESPN+. Sign up now!

The San Jose State Spartans will look to find some consistency after alternating wins and losses in each of their first five games of the season, including a 32-21 win over New Mexico last time out. Josh Love has thrown for 1,418 yards, 7 touchdowns and an interception while Nick Nash leads SJSU in rushing with 232 rushing yards and 3 touchdowns and DeJon Packer has 181 rushing yards and 3 touchdowns as well. Tre Walker leads San Jose State in receiving with 25 catches for 360 yards while Bailey Gaither has 15 grabs for 258 yards and the Spartans boast another five 100+ yard receivers this season. Defensively, Ethan Aguayo leads San Jose State with 58 total tackles while Jay Lenard has 41 total tackles including a team-high 28 solo tackles. Nehemiah Shelton and Bobby Brown II each have 3 interceptions for the Spartans this season as well. As a team, San Jose State is averaging 416 yards of total offense and 27.6 points per game while allowing 445 yards of total defense and 27.6 points per game against this season.

The Nevada Wolf Pack have had an extra week to prepare after being waxed in their last outing by a final score of 54-3 against Hawaii. Carson Strong has thrown for 729 yards, 3 touchdowns and 5 interceptions on 59.7% passing while Toa Taua leads Nevada in rushing with 269 rushing yards. Elijah Cooks leads Nevada’s receiving group with 23 catches for 260 yards and 4 touchdowns while Kaleb Fossum, the aforementioned Taua and Dominic Christian each have 100+ receiving yards this season. Defensively, Tyson Williams leads the Wolf Pack with 35 total tackles including a team-high 18 solo tackles while Dom Peterson leads Nevada with 3 sacks and Tristan Nichols leads the Wolf Pack with 2.5 sacks this season. As a team, Nevada is averaging 331.2 yards of total offense and 19.8 points per game while allowing 414 yards of total defense and 39.2 points per game against this season.

Nevada being favored at home I understand, as San Jose State has struggled in this matchup. However, this is one of the better San Jose State teams in recent memory as the Spartans have already logged more wins this season than the past two years combined and to put that into perspective, the Spartans have just three winning seasons since the year 2000. Nevada’s win over Purdue was solid, but outside of that the Wolf Pack haven’t really impressed much with their other two wins coming narrowly against FCS Weber State and a not so great UTEP team. San Jose State has that upset win over Arkansas and looked alright against New Mexico in their last outing. I think the Spartans win this game outright, but I’ll take the points here just to be safe.