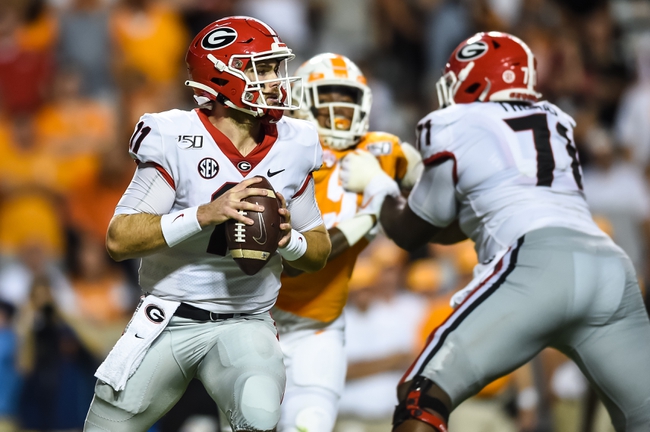 The South Carolina Gamecocks and the Georgia Bulldogs meet in a week 7 SEC conference college football tilt from Sanford Stadium on Saturday afternoon.

The South Carolina Gamecocks will look for a massive road win to get back to .500 after improving to 2-3 with a 24-7 win over Kentucky in their last outing. Ryan Hilinski has thrown for 912 yards, 5 touchdowns and 3 interceptions on 61.1% passing while Rico Dowdle leads the Gamecocks in rushing with 370 rushing yards and 4 touchdowns and Tavien Feaster has 290 rushing yards with 3 touchdowns. Mon Denson and Kevin Harris each have 100+ yards rushing for the Gamecocks while Bryan Edwards leads South Carolina in receiving with 27 catches for 348 yards and 3 touchdowns. Shi Smith has 220 receiving yards and Kyle Markway has 172 receiving yards this season. Defensively, Ernest Jones leads the Gamecocks with 38 total tackles including 20 solo tackles while Javon Kinlaw, D.J. Wonnum and Aaron Sterling have combined for 10 sacks this season. As a team, South Carolina is averaging 432.4 yards of total offense and 30.6 points per game while allowing 390.8 yards of total offense and 24.4 points per game against this season.

The Georgia Bulldogs will look to remain unbeaten after improving to 5-0 on the year after picking up a 43-14 win over Tennessee in their last outing. Jake Fromm has thrown for 1,076 yards and 8 touchdowns while D’Andre Swift leads Georgia in rushing with 460 rushing yards and 4 touchdowns. Brian Herrien also has 251 rushing yards and 4 rushing TDs while Zamir White and Kenny McIntosh are also 100+ yard rushers for the Bulldogs this season. Georgia has six different receivers with at least 100+ receiving yards, led by Lawrence Cager who has 15 grabs for 197 yards and 3 touchdowns. Defensively, Monty Rice leads the Bulldogs with 26 total tackles while Mark Webb has 24 total tackles including 17 solo tackles and Azeez Ojuiari has 3.5 sacks this season. As a team, Georgia is averaging 512.6 yards of total offense and 42.8 points per game while allowing 278.6 yards of total defense and 10.8 points per game against this season.

This is a lot of points to lay considering the history that these two teams have and this is one of the premier rivalries in the SEC. However, while South Carolina covered against Alabama, the Gamecocks still aren’t easy to trust and they’ve scored 24 points or less in their four game against FBS opposition this season. This will be the toughest SEC test so far for Georgia, but they’ve dismantled Tennessee and Vanderbilt by a combined score of 73-17 and I think the Bulldogs know that they can’t slip up the rest of the way. I believe that Georgia uses this game to make a statement and come out flying against South Carolina at home, so I’ll lay the points with Georgia here.