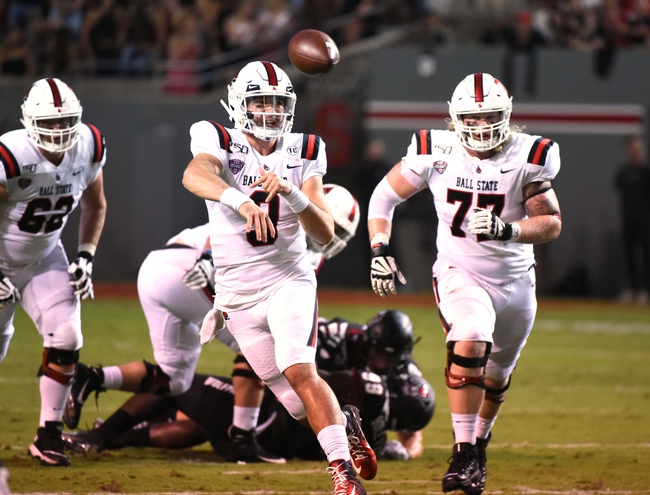 The Ball State Cardinals will look to get back to .500 after picking up a 27-20 win over Northern Illinois in their last outing. Drew Plitt has thrown for 1,407 yards, 11 touchdowns and 5 interceptions on 64.7% passing while Caleb Huntley leads the Cardinals in rushing with 440 rushing yards and 5 touchdowns. Riley Miller leads Ball State with 321 receiving yards on 23 catches with a pair of touchdowns while Antwan Davis has 289 receiving yards and 3 touchdowns and Justin Hall has a team-high 25 grabs for 241 yards. Defensively, Jacob White leads the Cardinals with 54 total tackles including a team-high 29 solo tackles while James Jennette III has 2.5 sacks and Amechi Uzodinma II has 3 interceptions this season. As a team, Ball State is averaging 430.4 yards of total offense and 32.4 points per game while allowing 417 yards of total defense and 31.6 points per game against this season.

The Eastern Michigan Eagles will be out to rebound from a 42-16 beatdown at the hands of Central Michigan in their last outing. Mike Glass III has thrown for 1,313 yards, 13 touchdowns and 5 interceptions on 66.7% passing while Willie Parker, Glass III and Shaq Vann each have 100+ rushing yards this season. Arthur Jackson and Quian Williams have 237 and 229 receiving yards respectively, with each owning a pair of touchdowns while Mathew Sexton has 214 receiving yards with 3 TDs and Dylan Drummond has 22 receptions for 202 yards and 3 scores as well. Defensively, Vince Calhoun leads the Eagles with 50 total tackles including 34 solo tackles while Kobie Beltram has 43 total tackles and Turan Rush has 3 sacks this season. As a team, Eastern Michigan is averaging 363 yards of total offense and 26.2 points per game while allowing 447.2 yards of total defense and 32.6 points per game against this season.

Eastern Michigan has been kind to us over the years as a covering machine. However, the Eagles have stumbled a bit lately, and while I’m usually quick to back EMU after a loss, I’m not so sure this is the spot to do it. Ball State has scheduled themselves pretty tough so far this season, and they’ve lost by 10-11 points to FAU, Indiana and NC State, three programs that are a big step up from Ball State. I just have more faith in Ball State being able to execute offensively, so I’ll side with the Cardinals on the road and lay the points here.