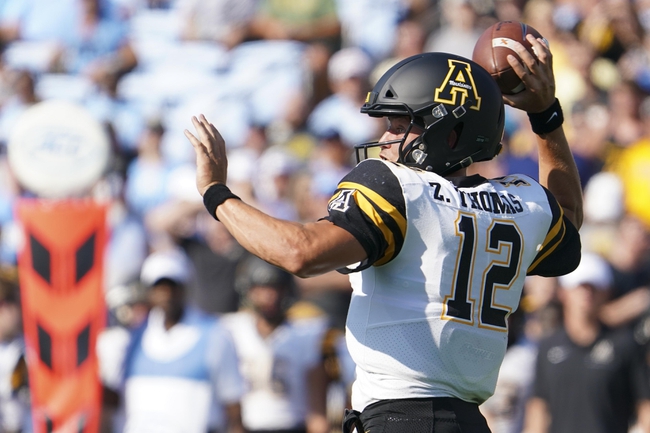 The Appalachian State Mountaineers will look to remain unbeaten, currently sitting at 4-0 on the year after a 56-37 win over Coastal Carolina in their last outing. Zac Thomas has thrown for 802 yards, 7 touchdowns and 2 interceptions on 71.9% passing while Darrynton Evans leads App State in rushing with 471 rushing yards and 9 touchdowns. Daetrich Harrington, Marcus Williams Jr. and the aforementioned Thomas each have 100+ rushing yards this year. Thomas Hennigan leads the Mountaineers in receiving with 21 grabs for 275 yards and 2 touchdowns while Malik Williams has 19 grabs for 232 yards and Corey Xavier Sutton has 134 receiving yards for App State this year. Defensively, Jordan Fehr leads Appalachian State with 34 total tackles while Akeem Davis-Gaither is right behind with 32 total tackles and a pair of sacks. Demetrius Taylor leads Appalachian State with 3.5 sacks while Shaun Jolly has a pair of interceptions. As a team, Appalachian State is averaging 429.2 yards of total offense and 47 points per game per game, the 5th-highest scoring offense in the nation, while allowing 420 yards of total defense and 29 points per game against this season.

The Louisiana Ragin’ Cajuns will be out to build on their current 4-game winning streak after back-to-back road wins following their 37-24 win over Georgia Southern in their last outing. Levi Lewis has thrown for 980 yards, 8 touchdowns and 2 interceptions on 64.8% passing while Trey Ragas leads the Cajuns with 548 rushing yards and 6 touchdowns and Elijah Mitchell is 2nd with 402 rushing yards and a team-high 9 touchdowns this season. Raymond Calais has 273 rushing yards while T.J. Wisham and Chris Smith each have 100+ rushing yards this season. Ja’Marcus Bradley leads Louisiana in receiving with 22 grabs for 352 yards and 4 touchdowns while Jamal Bell comes right behind with 21 catches for 241 yards and Peter Leblanc also has 110 yards for the Ragin’ Cajuns. Jacques Boudreaux has a team-high 33 total tackles while Kris Moncrief, Joe Dillon and Chauncey Manac each have a pair of sacks this season. As a team, Louisiana is averaging 540 yards of total offense per game, including the most rushing yards per game in the country with 314 per game as well as 44.4 points per game this season while allowing 345.2 yards of total defense and 21.4 points per game against this season.

This is one heck of a game to put midweek, and it deservedly gets the marquee with no other college game on Wednesday. With that said, this looks to be a preview of the Sun Belt championship game if everything stays the way it is the rest of the way, and a low line with Louisiana is tempting considering that the Ragin’ Cajuns are 5-0 ATS this season. However, if you take the points in a spot like this, you’re basically saying the dog wins outright and I think that’s what will happen here. The Mountaineers have never lost to Louisiana in the six all-time meetings against the Cajuns, with each of those wins coming by double-digits. Sometimes, a team just has your number, so I’ll take Appalachian State for the cover and sprinkle something on the money line here as well.