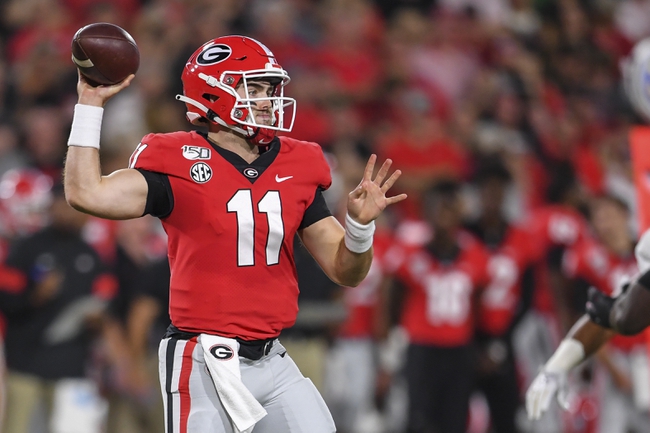 The Georgia Bulldogs and the Tennessee Volunteers meet in a week 6 SEC conference college football matchup from Neyland Stadium on Saturday afternoon.

The Tennessee Volunteers have had a week to stew on their 34-3 loss to Florida in their last outing, dropping the Vols to 1-3 on the year. Jarrett Guarantano has thrown for 736 yards, 7 touchdowns and 4 interceptions on 64.5% passing while Ty Chandler leads Tennessee in rushing with 282 rushing yards and 2 touchdowns. Eric Gray also had 165 rushing yards for Tennessee this year. Jauan Jennings leads the Volunteers with 19 receptions for 281 yards and 4 TDs while Marquez Callaway has 154 receiving yards and 2 TDs and Josh Palmer has 115 receiving yards this season. Defensively, Henry To’o To’o leads the Vols with 25 total tackles while Theo Jackson is right behind in 2nd with 24 total tackles including a team-high 12 solo tackles. As a team, Tennessee is averaging 355.2 yards of total offense and 26 points per game while allowing 339.8 yards of total defense and 25.2 points per game against this season.

Getting this many points at home with Tennessee is tempting in a conference matchup as they’ve either won or lost by less than 8 in all of their home games this season. However, those points would be tempting if it wasn’t Georgia on the other side. Those two losses came to BYU and Georgia State, a pair of teams not on the level below Georgia right now and the Bulldogs have beaten up on everyone that’s not Notre Dame, winning their other three games this season by at least 24 points. I don’t think that Tennessee will be able to keep this one close, so I’ll lay the points with Georgia in what I see ending up as a rout.