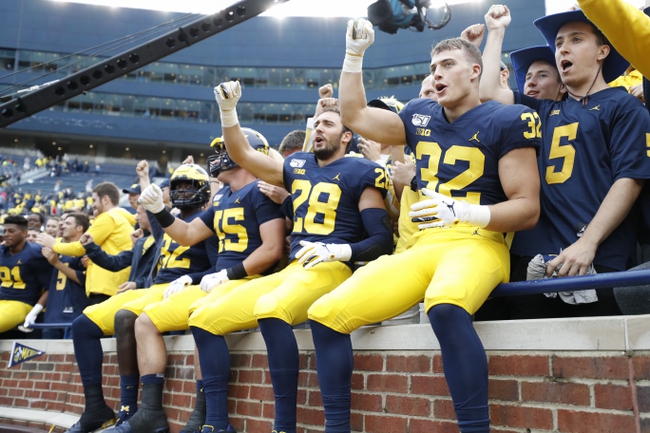 The Iowa Hawkeyes look for a statement road win to start 5-0 for the first time since 2015. The Iowa Hawkeyes have won four of their last six road games. Nate Stanley is completing 64.4 percent of his passes for 965 yards, eight touchdowns and zero interceptions. Stanley has three or more touchdown passes in six of his last 13 games. Ihmir Smith-Marsette and Brandon Smith have combined for 424 receiving yards and six touchdowns while Tyrone Tracy Jr. has eight receptions. The Iowa Hawkeyes ground game is averaging 217.5 yards per contest, and Mekhi Sargent leads the way with 299 yards and two touchdowns. Defensively, Iowa is allowing 8.5 points and 251 yards per game. Kristian Welch leads the Iowa Hawkeyes with 31 tackles, Amani Jones has one sack and Michael Ojemudia has two interceptions.

The Iowa Hawkeyes have failed to cover their last six games as a road underdog. The Michigan Wolverines have covered seven of their last 11 games as a home favorite. I don't trust Michigan or Jim Harbaugh in big games, and I've made that perfectly clear the last couple of years. However, it's been a while since Iowa has covered as a road underdog and they haven't really been tested up to this point. We're also not being asked to lay a bunch of points, so this is one outhouse games where you can kind of back the Wolverines without sweating too much. If Michigan doesn't win this game, outside voices will get even louder and heads may start to roll. I'll eat the reasonable number.