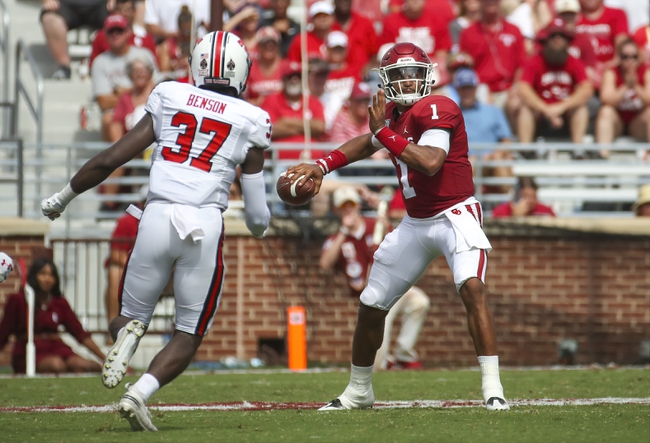 The Oklahoma Sooners will look to remain unbeaten after improving to 4-0 on the year with a 55-16 beatdown of Texas Tech in their last outing. Jalen Hurts has thrown for 1,295 yards, 12 touchdowns and an interception on 77.6% passing while also leading the Sooners in rushing with 443 rushing yards and 5 touchdowns. Trey Sermon is 2nd in rushing with 274 rushing yards and 3 touchdowns while Rhamondre Stevenson has 211 rushing yards and 4 scores and Kennedy Brooks has 206 rushing yards this season. CeeDee Lamb leads Oklahoma in receiving with 16 catches for 414 yards and 6 touchdowns while Charleston Rambo has 13 grabs for 373 yards and 4 TDs and Jadon Haselwood has 192 receiving yards this season. Defensively, Kenneth Murray leads the Sooners with 31 total tackles, including a team-high 12 solo tackles while Jalen Redmond has a pair of sacks. As a team, Oklahoma is top-5 in most major offensive statistics, boasting the highest average of total yardage per game, averaging 669 yards of total offense as well as the 2nd-highest scoring offense, putting up 55.5 points per game. The defense is giving up 345.2 yards of total defense and 18.8 points per game this season.

The Kansas Jayhawks will look for a big time home win after dropping back-to-back conference games with a 51-14 blowout loss to TCU last time out. Carter Stanley has thrown for 945 yards, 9 touchdowns and 4 interceptions on 65.1% passing while Khalil Herbert leads the Jayhawks on the ground with 384 rushing yards and 2 touchdowns and Pooka Williams Jr. is in 2nd with 308 rushing yards this season. Andrew Parchment leads KU’s receiving group with 28 catches for 377 yards and 4 TDs while Daylon Charlot, Stephon Robinson Jr. and Kwamie Lassiter II each have 100+ receiving yards for Kansas this season. Defensively, Dru Prox leads Kansas with 39 total tackles, including a team-high 30 solo tackles, while Bryce Torneden is right behind with 37 total tackles and Kyron Johnson and Mike Lee are each 30+ tacklers so far for Kansas this year. Darrius Moragne and Azur Kamara each have 2.5 sacks for the Jayhawks this year. As a team, Kansas is averaging 353.4 yards of total offense and 23.4 points per game while allowing 424.4 yards of total defense and 26.6 points per game against this season.

I’m really tempted by five free touchdowns at home with Kansas as you have to imagine Les Miles has his troops ready and raring to go for this one. This is also a major look-ahead spot for Oklahoma with a date with Texas on deck. However, Kansas’ performances against West Virginia and TCU were far from inspiring, and Oklahoma has done nothing but steamroll the opposition this season. I had some high hopes that maybe Texas Tech would compete against the Sooners and Oklahoma shut them down. Maybe this is the year that the Sooners are legit, only time will tell. But for right now, I’m not trying to step in front of the Oklahoma train, so even on the road, I’ll lay the points with the Sooners in this spot.