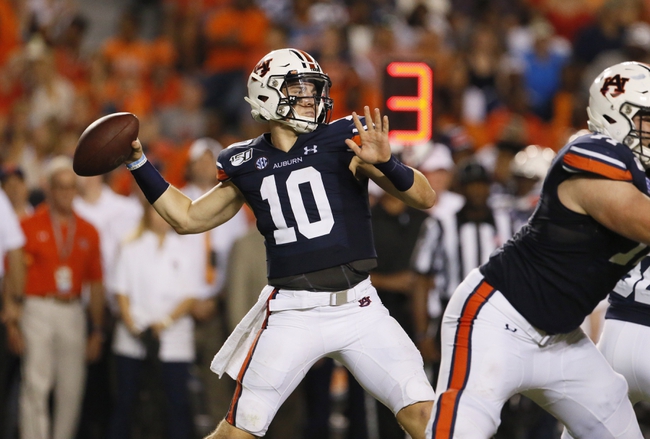 The Auburn Tigers will look to remain unbeaten at 5-0 on the year after picking up a 56-23 rout victory over Mississippi State in their last outing. Bo Nix has thrown for 980 yards, 7 touchdowns and 2 interceptions while JaTarvious Whitlow leads Auburn on the ground with 463 rushing yards and 7 touchdowns. Nix also has 173 rushing yards and 2 TDs while Kam Martin, Shaun Shivers and Joey Gatewood each have 100+ rushing yards for Auburn this season. Seth Williams leads Auburn with 289 receiving yards and 4 touchdowns while Eli Stove, Will Hastings, Sal Cannella and Anthony Schwartz each have 100+ receiving yards for the Tigers this year. Defensively, Jeremiah Dinson leads Auburn with 34 total tackles including a team-high 25 solo tackles while Tyrone Truesdell has a team-high 3 sacks and Marlon Davidson is right behind with 2.5 sacks this season. As a team, Auburn is averaging 455.2 yards of total offense and 38 points per game while allowing 320.2 yards of total defense and 17.2 points per game against this season.

The Florida Gators will also look to stay undefeated after improving to 5-0 themselves after a 38-0 beatdown of Towson in their last outing. Kyle Trask has thrown for 647 yards, 5 touchdowns and 2 interceptions on 77.3% passing while Lamical Perine leads Florida in rushing with 198 rushing yards and 3 touchdowns and Dameon Pierce has 158 rushing yards and 2 TDs this season. Van Jefferson leads Florida with 248 receiving yards and 18 receptions while Trevon Grimes is right behind with 231 receiving yards. Kyle Pitts has 17 catches for 189 yards and 3 touchdowns while Josh Hammond, Tyrie Cleveland and Freddie Swain each have 100+ receiving yards for the Gators this year. Defensively, David Reese II leads the Gators with 36 total tackles including a team-leading 16 solo tackles while Jonathan Greenard has a team-high 4 sacks and Jabari Zuniga has 3 sacks this season. As a team, Florida is averaging 430 yards of total offense and 34 points per game while allowing 284 yards of total defense and 8.8 points per game against this season.

Florida getting points at home is extremely tempting as the defense has been nothing short of spectacular in the early going this year, giving up 3 points or fewer in 3 of their 5 games this season. However, Tennessee, UT-Martin and Towson aren’t the hardest teams to suffocate if you’re the Gators, and their other two games against the better teams of the ones played so far, Miami and Kentucky, saw the Gators battle and win those games by a combined 12 points. Auburn is battle tested with a season-opening win over Oregon as well as victories over Texas A&M on the road and Mississippi State in consecutive weeks. I just like Auburn more than I do Florida side-by-side, so I’ll lay the field goal on the road with Auburn here.