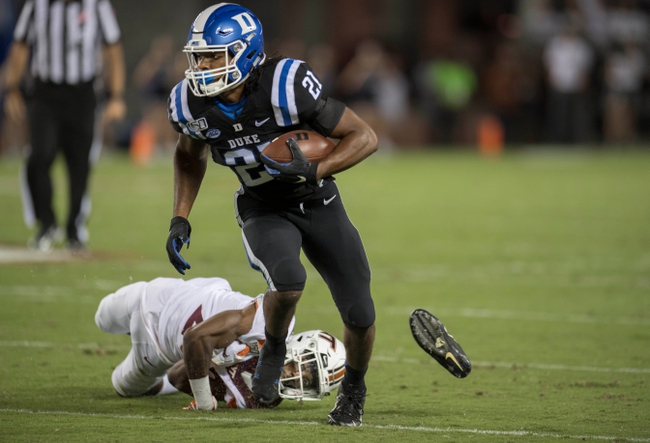 The Pittsburgh Panthers and the Duke Blue Devils will meet up on the college football gridiron Saturday.

Duke comes into this one at 3-1 so far. The Devils fell to Alabama in the opener but then took out NC A&T, Middle Tennessee and Virginia Tech in succession.

In the win over VT, Duke quarterback Quentin Harris had 163 yards with two scores, and also led the rush on 100 yards and a TD. Mataeo Durant had 53 yards on three grabs as well.

Over on the Pittsburgh side, they’re 3-2 this year. The Panthers have fallen to Virginia and Penn State but beaten Ohio, UCF and Delaware otherwise.

In the game five win, Panthers QB Nick Patti had 271 yards with two TDs and a pick, and Todd Sibley had 106 yards rushing. Taylor Mack had 124 yards and a TD off five receptions.

Since falling to a tough Alabama team, Duke has gotten things right moving forward and they’ve scored at least 41 in all three games. Pitt has had a couple of good scoring outings this year and stood tall against some tough teams but I don’t see them being able to keep it up in this one. I have to stick with Duke for the cover.