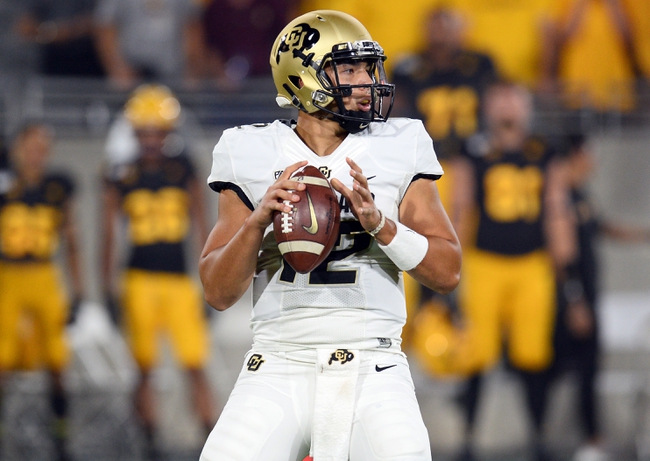 The Arizona Wildcats and the Colorado Buffaloes meet in a week 6 Pac-12 conference college football matchup from Folsom Field on Saturday afternoon.

The Arizona Wildcats will look to build on their current 3-game winning streak after a 20-17 win over UCLA in their last outing. Khalil Tate has thrown for 684 yards, 6 touchdowns and 4 interceptions while Grant Gunnell has racked up 503 yards and 4 touchdowns on 69.1% passing. Gary Brightwell leads Arizona’s rushing attack with 259 yards and 4 touchdowns while the aforementioned Tate has 238 rushing yards and 2 TDs and J.J. Taylor has chipped in 208 yards and 2 touchdowns of his own. The Wildcats have 7 different receivers with at least 100 receiving yards this season, led by Stanley Berryhill III who has a team-high 187 receiving yards and 2 touchdowns while Tayvian Cunningham has 177 receiving yards, 2 touchdowns and a team-high 16 grabs. Defensively, Colin Schooler leads Arizona with 32 total tackles, including a team-high 24 solo tackles while Tony Field II is right behind with 28 total tackles including 22 solo tackles. Jalen Harris has a team-high 25 sacks while Lorenzo Burns and Jace Whittaker each have 3 interceptions this season. As a team, Arizona is averaging the 5th-most total yardage per game, racking up 552.2 yards of total offense as well as 37.8 points per game while allowing 474.2 yards of total defense and 29.2 points per game against this season.

The Colorado Buffaloes have had an extra week to rest after picking up a 34-31 win over Arizona State in their last outing to improve to 3-1 this season. Steven Montez has thrown for 1,164 yards, 9 touchdowns and 2 interceptions on 67.2% passing while Alex Fontenot has rushed for 298 yards and 4 touchdowns and Jaren Mangham has 163 rushing yards and 3 TDs this season. Tony Brown leads Colorado in receiving with 19 receptions for 301 yards and 4 touchdowns while K.D. Nixon has 17 grabs for 295 yards and Laviska Shenault Jr. has 17 receptions of his own for 226 yards and 2 touchdowns. Defensively, Nate Landman leads Colorado with 41 total tackles including 28 solo tackles while Mikial Onu has 3 interceptions and Mustafa Johnson has a team-high 3 sacks this season. As a team, Colorado is averaging 434.8 yards of total offense and 35.8 points per game while allowing 467.8 yards of total defense and 30.8 points per game against this season.

I’ve genuinely gone back and forth on this game as I like Arizona and how hard they battled against UCLA in their last outing, but that was a game that Arizona probably should’ve won a bit easier even with their backup in. On the other hand, Colorado’s had a week off, but the Buffaloes have been in some tight games of their own lately and are at home. The issue is that home field hasn’t mattered much between these two teams as the road team’s covered in 6 of the last 7 meetings and in the thin air of Boulder, I think this game lends itself to being a more offensive minded game, to which I’d lean towards taking Arizona and the points as I’m more comfortable with the Wildcats against the number in conference play.