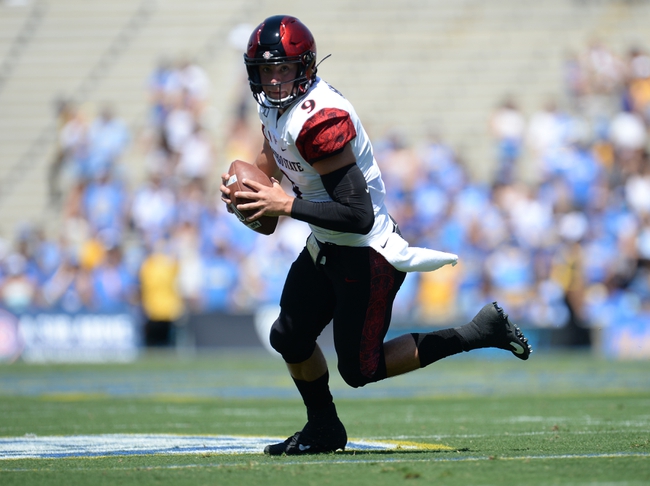 The San Diego State Aztecs have had a week to stew on their first loss of the year, coming in the form of a 23-17 loss at home to Utah State. Ryan Agnew has thrown for 798 yards, 4 touchdowns and 2 interceptions on 61.3% passing while Jordan Byrd leads SDSU in rushing with 207 rushing yards and 2 TDs and Chance Bell is right behind with 198 rushing yards. Kobe Smith leads the Aztecs with 18 catches for 267 yards and 2 touchdowns while Jesse Matthews is 2nd with 13 grabs for 135 yards. Defensively, Dwayne Johnson Jr. leads San Diego State with 31 total tackles while Kyahva Tezino is right behind in 2nd with 30 total tackles including a team-high 18 solo tackles this season. As a team, San Diego State is averaging 345 yards of total offense and 19.2 points per game while allowing 279.8 yards of total defense and 11.8 points per game against this season.

The Colorado State Rams will look to snap a three game losing streak after a 34-24 road loss to Utah State in their last outing. Patrick O’Brien has thrown for 757 yards, 2 touchdowns and an interception on 58.1% passing while Marvin Kinsey Jr. leads the Rams in rushing with 626 rushing yards and 4 touchdowns and Dante Wright has 114 rushing yards and 2 TDs this season. Wright leads CSU in receiving with 407 receiving yards and 3 touchdowns while Warren Jackson has a team-high 31 catches for 327 yards and 3 TD grabs of his own. Nate Craig-Myers, Kinsey Jr., EJ Scott and Trey McBride have all broken the 100-yard receiving plateau for the Rams this season. Defensively, Jamal Hicks leads Colorado State with 39 total tackles while Dequan Jackson has 34 total tackles. As a team, Colorado State is averaging 501 yards of total offense and 32.4 points per game while allowing 440.6 yards of total defense and 39 points per game this season.

The Aztecs have had a lot of success ATS in this matchup, but I just feel weird leaving this many points on the table with a Colorado State team that’s really good offensively. The Aztecs have been getting it done with their defense, but I just don’t know if they’re capable of keeping pace with the Rams if Colorado State gets going. I think San Diego State wins this game, but I like the Rams’ offense enough to take the points here.