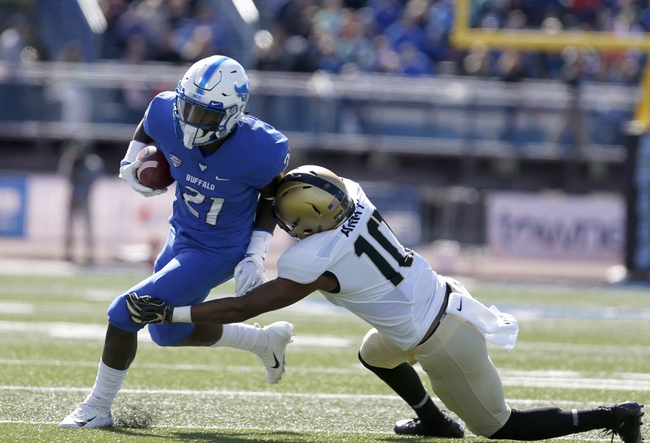 The Ohio Bobcats need a victory here to snap a three-game losing streak. The Ohio Bobcats have lost four of their last five road games. Nathan Rourke is completing 57.1 percent of his passes for 857 yards, six touchdowns and three interceptions. Rourke has two or more touchdown passes in five of his last 10 games. Shane Hooks and Isiah Cox have combined for 312 receiving yards and two touchdowns while Jerome Buckner has nine receptions. The Ohio Bobcats ground game is averaging 159.7 yards per contest, and Rourke leads the way with 187 yards and two touchdowns. Defensively, Ohio is allowing 29.5 points and 464 yards per game. Javon Hagan leads the Ohio Bobcats with 39 tackles, Cole Baker has 2.5 sacks and Marlin Brooks has one interception.

The Buffalo Bulls need a victory here to get back to a .500 record. The Buffalo Bulls have won their last five home games. Matt Myers is completing 46.7 percent of his passes for 602 yards, six touchdowns and four interceptions. Myers has at least one touchdown pass in four of his first five games. Antonio Nunn and Zac Lefebvre have combined for 310 receiving yards and three touchdowns while Carlton Todd has five receptions. The Buffalo Bulls ground game is averaging 240.2 yards per contest, and Jaret Patterson leads the way with 546 yards and four touchdowns. Defensively, Buffalo is allowing 29.2 points and 310.4 yards per game. Joey Banks leads the Buffalo Bulls with 30 tackles, Ledarius Mack has three sacks and Aapri Washington has one interception.

The Ohio Bobcats have covered eight of their last 11 games as a road favorite. The Buffalo Bulls have covered 10 of their last 13 games as a home underdog. I understand that Buffalo isn't getting much love from oddsmakers with Matt Myers possibly not playing. Still, I'm not running to the window to lay chalk with Ohio on the road, a team that's been killed defensively for the most part and hasn't been great on the road dating back to last season. Starting quarterback or not, Buffalo can do just enough to squeeze out a victory here.