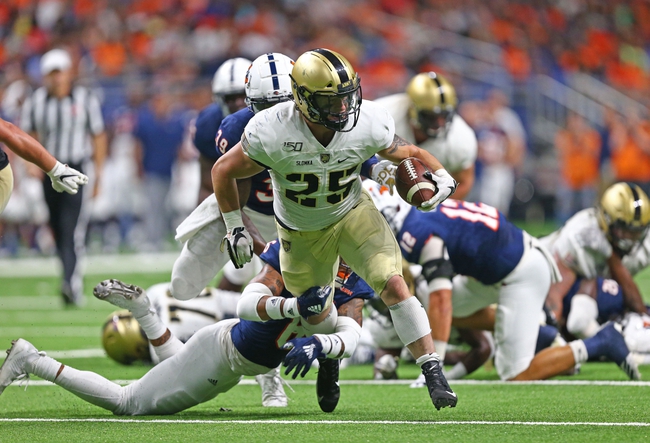 The Tulane Green Wave and the Army Black Knights meet in a week 6 college football matchup from Blaik Field at Michie Stadium on Saturday afternoon.

The Tulane Green Wave will look to build on back-to-back wins after a 38-31 win over Houston in their last outing. Justin McMillan has thrown for 610 yards, 5 touchdowns and 2 interceptions on 50.6% passing while also sitting 2nd in rushing with 245 rushing yards and 4 touchdowns. Darius Bradwell leads Tulane with 255 rushing yards while Corey Dauphine has 202 rushing yards. Amare Jones and Tyjae Spears each have 100+ rushing yards for the Green Wave this season. Darnell Mooney leads Tulane in receiving with 13 catches for 231 yards and 2 touchdowns while Jalen McCleskey has 8 grabs for 140 yards and 2 TDs of his own. Defensively, Marvin Moody leads Tulane with 19 total tackles while Patrick Johnson has a pair of sacks. As a team, Tulane is averaging 454.8 yards of total offense and 36 points per game while allowing 340.2 yards of total defense and 18.8 points per game against this season.

The Army Black Knights will also look to build on back-to-back victories after a 52-21 win over Morgan State last time out. Connor Slomka leads the Black Knights in rushing with 261 rushing yards along with 2 touchdowns while Kell Walker and Sandon McCoy have 161 and 158 rushing yards respectively with both logging a pair of touchdowns. Kelvin Hopkins Jr. has 121 rushing yards and a team-high 3 touchdowns while Artice Hobbs IV leads Army in receiving with 4 catches for 142 yards and a touchdown. Defensively, Cole Christiansen leads Army with 39 total tackles including a team-high 23 solo tackles while Eljiah Riley has 26 total tackles including 20 solo tackles and a team-high 3 sacks this season. As a team, Army is averaging 342 yards of total offense including the 5th-most rushing yards per game with 293.5 rushing yards per game and 29.5 points per game while allowing 287.8 yards of total defense and 16.2 points per game against this season.

The road team has had a lot of success in this matchup, and Tulane is looking like a team that could make some noise in the AAC over the coming weeks. However, it’s still a bit surprising to see Army as an underdog at home. Sure, the Black Knights haven’t covered in their two home games and Tulane has the more impressive wins of the two on their resume. But the option chews up a lot of clock and Army has shown that that style of offense can help them rack up points in a hurry and hang with some of the nation’s best teams. I wouldn’t be surprised if Tulane kept their momentum going with a win here, but I just can’t pass up the value of free points with Army here.