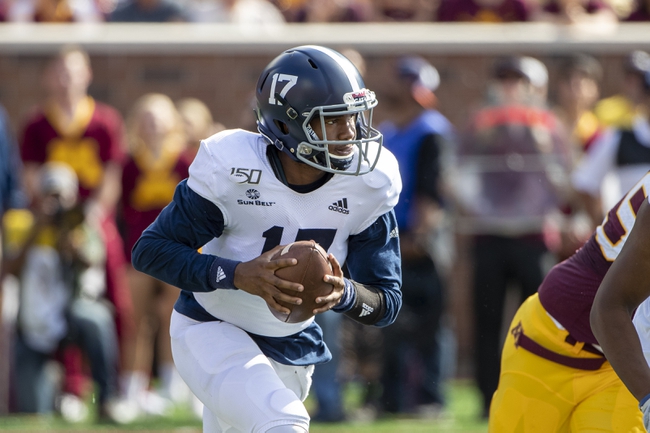 The Georgia Southern Eagles will look to rebound from back-to-back losses after a 37-24 defeat at the hands of Louisiana in their last outing. Justin Tomlin leads Georgia Southern with 162 passing yards on 46.2% passing while also sitting 2nd on the team in rushing with 193 rushing yards. Logan Wright leads the Eagles with 248 rushing yards and 2 touchdowns while Matt LaRoche has 190 rushing yards and J.D. King has 158 rushing yards this season. Defensively, Rashad Byrd leads the Eagles with 34 total tackles while Reynard Ellis has 26 total tackles including a team-high 17 solo tackles and Kenderick Duncan Jr. has 27 total tackles and a pair of interceptions this year. As a team, Georgia Southern is averaging 251.5 yards of total offense and 21.2 points per game while allowing 413.2 yards of total defense and 36.2 points per game against this season.

The South Alabama Jaguars could use a win to rebound from 3 straight defeats after a 30-17 loss to Louisiana-Monroe last time out. Cephus Johnson has thrown for 514 yards, 3 touchdowns and 5 interceptions on 53.6% passing while Tra Minter leads USA in rushing with 432 rushing yards and a pair of touchdowns while the aforementioned Johnson has 192 rushing yards and a team-high 4 scores. Jared Wilson also has 154 rushing yards for the Jags this season. Kawaan Baker leads South Alabama with 227 receiving yards and 2 touchdowns while Jalen Tolbert has 158 receiving yards and Minter has a team-high 16 receptions out of the backfield for 146 yards. Nick Mobley leads the Jaguars’ defense with 41 total tackles while DJ Daniels has 26 solo tackles as part of his 33 total tackles this season. As a team, South Alabama is averaging 333.4 yards of total offense and 16.8 points per game while allowing 403 yards of total defense and 31.2 points per game against this season.

I’m not the kind of person to lay nearly two touchdowns on the road between a pair of teams that are 1-3 heading into a game. However, Georgia Southern has flat out owned South Alabama in their five all-time meetings, going 5-0 and winning each of the meeting by at least 15 points. Granted, the two closest meetings came at South Alabama, but those games we still decided by 22 and 15 points. The last two meetings have been decided by 87 points. Ouch. Sometimes you just have to back dominant trends, and that’s what I’ll do here so give me Georgia Southern and lay the points.