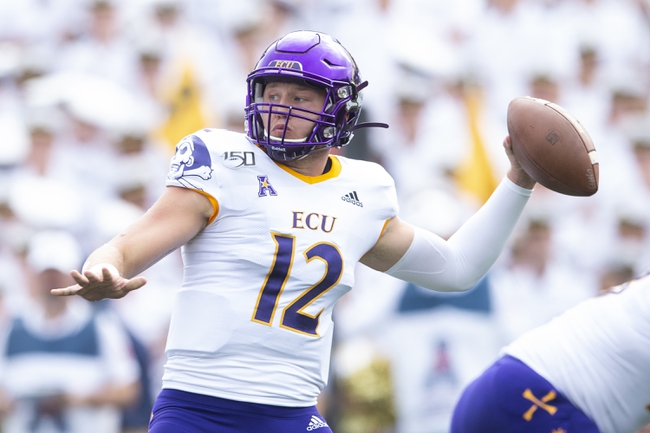 The Temple Owls and the East Carolina Pirates meet in a week 6 AAC conference college football matchup from Dowdy-Ficklen Stadium on Thursday night.

The Temple Owls will look to build on their 3-1 record after a 24-2 win over Georgia Tech in their last outing. Anthony Russo has thrown for 1,071 yards, 10 touchdowns and 6 interceptions on 57% passing while Re’Mahn Davis leads the Owls in rushing with 346 rushing yards and 3 touchdowns and Jager Gardner has 238 rushing yards and 2 touchdowns this season. Jadan Blue leads Temple’s receiving corps with 27 catches for 402 yards with 2 touchdowns while Branden Mack has 17 catches for 228 yards and Isaiah Wright has 22 catches for 201 receiving yards and 3 touchdowns. Shaun Bradley leads Temple’s defense with 24 total tackles with a team-high 19 solo tackles while Ifeanyi Majieh has 23 total tackles and a team-high 2.5 sacks this season. As a team, Temple is averaging 434 yards of total offense and 30.5 points per game while allowing 284.2 yards of total defense and 17.2 points per game against this season.

The East Carolina Pirates will look to build on back-to-back wins after a 24-21 victory over Old Dominion in their last outing. Holton Ahlers has thrown for 913 yards, 4 touchdowns and 5 interceptions on 54.1% passing while also sitting 2nd in rushing with 186 rushing yards and a team-high 3 touchdowns this season. Demetrius Mauney leads the Pirates in rushing with 199 rushing yards while Darius Pinnix Jr. has 157 yards and 2 touchdowns and Trace Christian has 112 rushing yards as well on the year. Blake Proehl leads ECU’s receiving corps with 20 catches for 283 yards and 2 touchdowns while Deondre Farmer, Tyler Snead and C.J. Johnson each have 108 receiving yards this season. Defensively, Xavier Smith leads the Pirates with 32 total tackles while Daniel Charles, Kendall Futrell and Bruce Bivens each have 30 total tackles with Futrell posting a team-high 4 sacks. Gerard Stringer has 2 interceptions and Alex Turner has 26 total tackles with 3 sacks this season. As a team, East Carolina is averaging 370.8 yards of total offense and 21.4 points per game while allowing 342.4 yards of total defense and 22.6 points per game against this season.

I’m a bit intrigued by East Carolina and the points as Temple’s lone road game saw the Owls lose to the Bulls by 16 points as 14-point favorites. However, since the Owls and Pirates have become AAC opposition, the Owls have gone 5-0 SU and ATS, winning each game by double-digits, including the last three by at least 24 points, an average margin of victory of 31.3 points per game in that stretch. The last meeting also saw Temple win by 43 points last year. East Carolina is better than those teams in this year’s edition, but I just don’t see the Pirates being able to keep up with Temple’s intensity, so I’ll lay the points with the Owls in this spot.